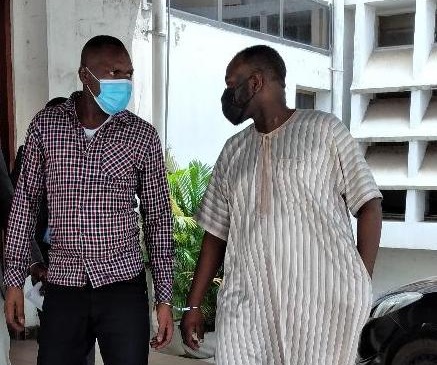 An Accra Circuit Court presided over by Ms Christina Cann has sentenced Ibrahim Keita, a 31-year-old Mali national and Baba Isaah, a 31-year-old Ghanaian to six and five years in prison  respectively in hard labour for conspiracy to commit crime.

The presiding judge said the sentences of Ibrahim Keita were to run concurrently.

Delivering her ruling, the judge, Ms Cann indicated that the offence was premeditated and considering the inhuman treatment meted out to the victims and the increasing incidence of human trafficking, there was the need to apply the law in order to curb the practice.

She told the court that the convicts had initially wanted to sell the victim at GHC 150.000 but later increased the price to GHC 160.000 due to the depreciation of the Cedi.

The prosecutor said having settled on the price to transact the business, Ibrahim Keita lured the victim into Ghana on June 26, 2020, on the pretext that he had secured a job for him to clean, even at the time the land borders were closed as a result of the outbreak of COVID-19.

She said when the victim arrived in the country, the convicts persons arranged with the buyer to receive the money at Swedru in exchange of the victim. In the process, they were arrested when the purported buyer introduced himself as a policeman.

The prosecution witness said investigations revealed that Ibrahim Keita travelled to Benin and met with the victim who was assisting the aunt to operate a restaurant and discussed with him about his intention to double his money but the victim could not assist him.

Later, Keita befriended Baba Isaah at Agona Nyarkrom in 2019 and discussed with intention to double his money which the second convict tried all means to assist him but was not successful.

Chief Inspector Asantewaa told the court that since he was in dire need of money, Ibrahim Keita contrived another plan to sell a human which the second convict agreed to the plan.