2 more bridges to be constructed at Buipe, Yapei 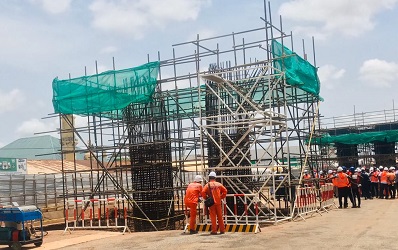 Two new bridges are to be constructed on the Bupei and Yapei sections of White and Black Volta rivers respectively on the Tamale-Kumasi highways.

The Minister of Roads and Highways, Mr Kwasi Amoako Atta who disclosed this to the press in Tamale yesterday, mentioned that the contractors had already moved to sites.

“As I speak to you now, the contractors have already mobilised and on site,” he stated.

Mr Amaoko Atta also indicated that Daboya Bridge would also be contracted alongside with the two new bridges.

The minister who was in the region to inspect progress of work on various roads in the area hinted that the President in the coming days would cut sod for official commencement of works on the bridges.

He explained that the construction of those bridges was meant to ease pressure on the old bridges.

The minister added that the construction would ameliorate the suffering of commuters, especially cargo trucks drivers who ply the highway.

He also said that it would open up the whole area to business since it was a major road linking Ghana to the neighboring countries.

Touching on the Tamale Interchange, Mr Atta was very impressed about the progress of works and commended contractors for the good job done so far.

According to him the Chinese contractors were on course, working assiduously to finish on schedule, adding that 40 per cent work on the interchange had been completed.

He reiterated President Nana Addo Dankwah Akufo-Addo’s commitment to improving the road network in the country.

He assured the people of the region that efforts were being made to ensure that all projects started by the government were completed on schedule.

The Northern Regional Minister, Mr Salifu Saeed on his part commended the government for the numerous roads projects in the region.

He was very optimistic that the construction of the roads would help reduce poverty level as farmers would be able to transport their farm produce to available market centres without difficulties.

The Roads and Highways Minister was accompanied on the tour by various engineers under the ministry.