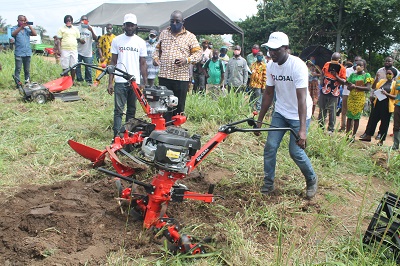 Government in collaboration with Knight Transfer of Technology, a Czech-based technological entity, has procured 250 modernised mini tractors and implements for small and medium-scale farmers in the country.

This forms part of efforts in achieving the goals for the Planting for Food and Jobs (PFJs) programme.

The equipment would, among other things, enable the farmers to do land preparation, planting and harvesting.

They were procured through a public-private partnership at a cost of €10 million, an interest-free loan facility from the Czech Republic Export Bank.

Director of Agricultural Engineering Services Directorate (AESD) of the Ministry of Food and Agriculture Mr Amatus Deyand said the implements would boost agriculture in the country as it would augment activities of smallholder farmers.

“The set of agriculture implement have been subsidised as government has taken 40 per cent of the original cost of the machines which ranges between GH₵18,000 and GH₵ 125,000 ,” he said.

According to Mr Deyand, the Ministry of Food and Agriculture was poised to help small and medium-scale farmers have access to suitable and modernised machines to increase production.

“The vision of the Ministry is to equip, especially small and medium-scale farmers, with appropriate mechanisation options to ease the laborious work associated with farming operations and to ultimately enhance productivity,” he said.

Chief Executive Officer of the Knight Transfer of Technology, Dr Karl Laryea said the procurement of the implement was the company’s contribution to realising of the PFJs programme by helping farmers move from the traditional farming to a mechanized system.

In order to develop implements to suit the agriculture conditions in Ghana, Dr Laryea noted that some Ghanaians were sent to Czech for training.

These individuals, according to Dr Laryea, “can now assemble, operate and service both the Cabrio Compact and Global Multipurpose Mini Tractors.”

The equipment was showcased at the Awutu Camp Prison in the Central Region last Friday.

Speaking at the event, the District Director of Agriculture for Awutu Senya East, Mr A. K. B. Beyang  urged small and medium-scale farmers to harness resources to buy and use the equipment to boost agricultural production.