27 foreigners arrested for attempting to cross Ghana into Togo 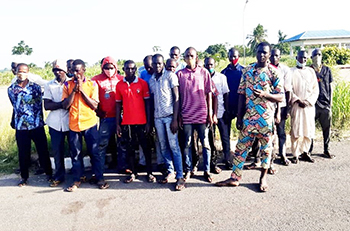 Twenty-seven foreign nationals, who attempted to cross Ghana into Togo have been arrested by personnel of the Ghana Immigration Service (GIS), stationed at the Akanu-Noepe joint border post.

The 27, made of 14 Nigerians and 13 Nigeriens, were said to have concealed themselves in a cargo truck in a bid to outwit the GIS officials at the post, however,  luck eluded them, and they were arrested last Tuesday, at half past midnight.

A GIS spokesman, Assistant Inspector Felix Klu-Adjei, told the Ghanaian Times in Ho yesterday that the suspects included the co-drivers and their mates.

He said that investigations revealed that the DAF truck with a Nigerian registration number, ZUR 100 ZY, arrived in Ghana on Sunday, May 17, through the Akanu Border Post, fully loaded with onions for delivery in Accra.

Assistant Inspector Klu-Adjei said that while the truck was returning to Togo, the GIS officers on duty at the border post stopped the vehicle at the departure gate and conducted a search on it.

The search, he said, revealed the foreigners on board the truck and they were arrested after which personnel of Port Health officers were called to screen them.

Assistant Inspector Klu-Adjei said that the suspects would be taken to Accra for “further action”.