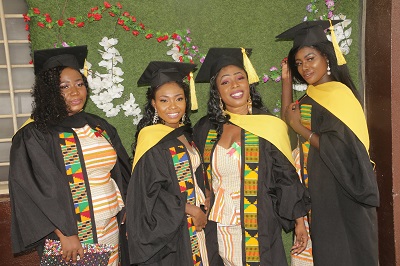 Thirty-five students of Accra based Salon Services Hair and Beauty Academy last weekend graduated after undergoing a year and half study in Cosmetology.

The event, held at the Osu Ebenezer Presbyterian Church Hall, was under the theme ‘Improving our skills through training for financial independence and self-empowerment.

Administrator of the School, Ms Claudia Nanabea Addo Twum said the graduation was held for the 2000 year group students each of which undertook studies in cosmetology, beauty therapy, hair technology and make-up artistry.

Aside that, the best three students in all the related courses were presented with special awards.

In shampooing and roller setting, Ms Mercy Barnor emerged top with Tania Addy and Janet Boahemaa following in first and second runners up; the same as Manicure and Pedicure where Rose Ocquaye, Lily Quaynor and Janet Boahemaa were the best three.

Ms Rose Ocquaye came up tops again in Nail Extension ahead of Portia Sam and Djariatu Lauriano with Leah Adjetey winning the best award for Braids followed by Portia Sam and Georgina Hughton.

Ms Micheline Addy was adjudged the best in Massage and was followed by Francisca Vidzeku and Janet Boatemaa.

The Styling and Cutting had Susan Fiagbor, Lily Quaynor and Gifty Ankrah as the best while Rose Ocquaye, Nancy Kodua and Djariatu Lauriano emerged the best three in Make-up.