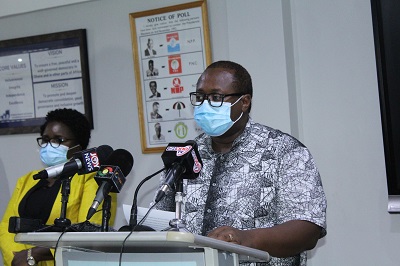 ABOUT 500 Civil Society Organisations (CSOs) across the country have begun a campaign to get President Nana Addo Dankwa Akufo-Addo to rescind his decision on the Auditor-General (AG), Daniel Domelevo’s accumulated leave.

Under the taglines #bringbackdomelevo and #letinstitutionswork, the CSOs are of the view that the action by the President was unconstitutional and a threat to the liberation of the AG and other independent governance institutions.

At the launch of the campaign in Accra yesterday, Dr Kojo Asante, Director of Advocacy and Policy Engagement at Centre for Democratic Development (CDD-Ghana) who read a statement on behalf of the CSOs,urged the President to reversehis decision to affirm his commitment against the corruption fight.

“We find the entire episode and the justification for the President’s action regrettable and inconsistent with both the letter and spirit of the 1992 Constitution.

“In our estimation, such actions only weaken our quest for good democratic governance grounded in the principle of checks and balances, rule of law and the pursuit of public accountability”, he said

Further, a worker or an employee cannot enter into any agreement to forgo a leave entitlement; such agreement would be void. Mr Domelevo was said to have taken nine out of a possible 132 days since his appointment in 2016.

However, a reply from Mr Domelevo, challenging the legal basis on the presidential directive was met with a counter argument and directive that he should add his 2020 leave days; bringing the total to 167 days.

According to Dr Asante, the argument that Mr Domelevo had some accumulated leave was invalid because the Court of Appeal’s decision in the case of Samuel M.K Adrah versus Electricity Company of Ghana, the court said there was no such thing as accumulated leave and if workers did not take their leave, it was lost.

He said the 1992 Constitution  did not  give the President a Human Resource Manager  role to be administering the leave of institutions like the AG’ Office and wondered if that meant the President could ask the Electoral Commissioner and the Chief Justice to proceed on leave or  ‘discipline’ them as being done to the AG.

While acknowledging the fact that Mr Domelevo was without fault, he said his work as AG over the last three years had been impartial and exemplary and had been commended by many including the President himself for which reason the President should rethink his directives to save his own international image.