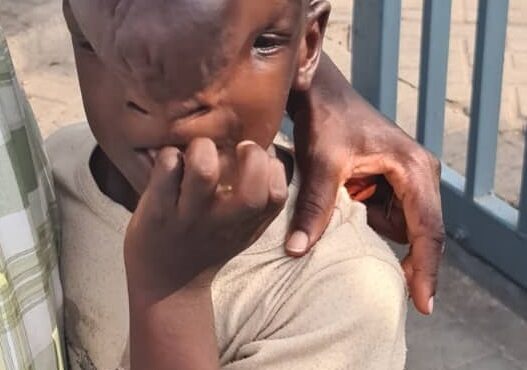 A six-year-old boy, Moses Bentum is unable to attend school because of his facial deformity.

According to his 33-year-old mother, Ms Felicia Setuagbe, a preacher, her son was diagnosed of brain tumour months after his birth.

She said she “wishes her son would go to school but is afraid he would become a laughing stock and some children would run away when they see him.”

Ms Setuagbe told The Spectator that she feared the school authorities would not be able to give him the needed attention he needs and may lead to further complications because she would like to closely monitor him.

She said that it was difficult to cater for the boy all alone cognisance of the COVID-19 pandemic since Moses’ father had abandoned them to their fate.

Ms Setuagbe said with the help of some public-spirited people the boy underwent his first surgery three years ago in India to stop the tumour from further growth.

She said the medical team subsequently advised that Moses undergoes two more surgeries to correct his face; however, lack of funds had made it impossible.

She said she had started the process at the Korle-Bu Teaching Hospital but had to abandon it because of financial constraint.

“I sometimes weep when I set eyes on my dear son because of my inability to help him.”

The resident of Kpone therefore appealed to the public to come to their aid to enable her son undergo the necessary surgery to have a normal life as well as and also enable her get a full time job to properly cater for him.

Pictures by Dzifa Tetteh Tay –  Moses Bentum who is suffering from brain tumour.

Felicia Setuagbe and her son Moses