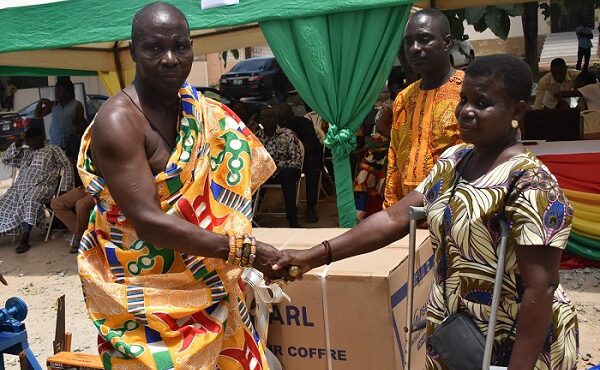 Sixty-Eight persons with disabilities have received items and cash at Shama in the Western Region.

The disbursement took place after the assembly members in collaboration with the District Department of Social Welfare and Community Development had conducted feasibility studies on the needs of people with disabilities.

The District Chief Executive (DCE) of Shama, Mr. Ebenezer Dadzie said all people living with disabilities should be seen as part of the community and must be supported in various ways to make their living comfortable.

He said 68 persons with disabilities in the district would be given items ranging from deep freezers, containers, industrial sewing machine, fufu pounding machine, pipe connection, wheel chairs, carpentry tools, phone accessories and provisions including some start-up capital in cash.

He told the persons with disabilities to count themselves as able bodied persons who could stand up to the task of any work and this would make them live comfortably adding “change your mindset and situations will work well for you”.

Mr. Dadzie said the assembly members from the different electoral areas in collaboration with the Department of Social Welfare would monitor the operations and evaluate the performance of each beneficiary and report to the assembly.

Madam Cynthia Kumi who received a deep freezer told this reporter she stayed very close to the road at Shama Junction and so she would sell water, minerals and other consumables and use the profit to improve on her living condition.