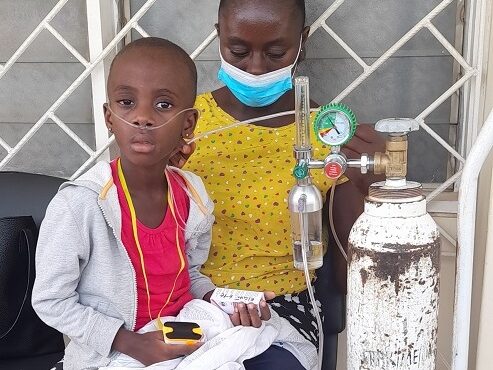 A four-year-old girl who lives with her parents at Aboabo, a suburb of Koforidua is unable to attend school and would have to live on oxygen for the rest of her life as a result of chronic lung cancer.

Elita Afia Boafo Asare Junior who is second of a set of twins has been diagnosed with Bronchopulmonary Dysplasia (BPD), a chronic lung disease, which makes  it difficult for her to breathe .

Born a preterm, at 33 weeks together with her twin sister Elisa, who is healthy and well, Elita developed a respiratory distress syndrome commonly associated with children born preterm.

After spending several days with her mother at the Neonatal Intensive Care Unit (NICU), she was well and discharged but found her way back to the hospital at age four due to a new diagnosis.

Speaking to “The Spectator” on Elita’s case, Dr Afua Gyamfi, Director of Paediatrics at the Children’s Hospital at the Koforidua Central Hospital said that Elita’s situation was common with children born preterm, adding that some had respiratory problems shortly after birth.

She explained that the child’s poor lung capacity and less space made it difficult for her to breathe well.

According to her, there was no treatment to cure this ailment except to focus on treatment meant to support breathing and that only oxygen could help such people grow and thrive.

‘Elita has a lung disease and the only way to help is to have a lung transplant but the question is whether her parents can afford it?” asked, adding that, for now she had to live on oxygen.

The doctor indicated that Elita may live on oxygen for a long time either, for life or may recover at a certain point.

Dr Gyamfi explained that after several counselling of her mother and interactions between her and the hospital, both parties decided that the little girl should be given a paliative care at home to prevent incurring high hospital bills and other inconveniences of the family.

She revealed that after offering them with two oxygen cylinders and making arrangements for refilling , Elita and mother were discharged to continue caring for her at home whilst the public health care team would also visit to ensure her wellbeing.

Dr Gyamfi suggested that her parents can acquire an oxygen concentrator which cost about Ghc7,000 for her to supplement their buying of oxygen to reduce cost.

However, she stated that the oxygen concentrator may also attract constant electricity charges.

According to her parents, Mr and Mrs Asare, Elita uses a cylinder of oxygen at the cost of Ghc46 daily .

Her mother Madam Mary Danquah Asare explained the financial burden was becoming unbearable as they would not be able to afford buying the oxygen all the time to keep their daughter alive.

“I feel so sorry for my little girl that she has to live on this till God knows when. She has grown lean and malnourished but I have faith that she will be well again if we get help to provide oxygen for her all the time.”

She told The Spectator that carrying the cylinder alongside her child around attracted huge cost and appealed to philanthropists, institutions and corporate bodies as well as individuals to come to their aid.

“As a hairdresser, I have now closed my shop and cannot work because of my daughter’s situation. I have to be with her all the time, leaving all the burden on my husband who is a photographer,” she lamented.

Elita’s father, Mr Foster Asare said as a photographer, he had been using all of his earnings on buying oxygen for the little girl, adding that the situation was challenging.

“I am pleading with the public, government, individuals and philanthropists to come to my aid because my strength is failing me but I pray she gets help and becomes healthy like her other twin sister”