A scandalous season takes a bow 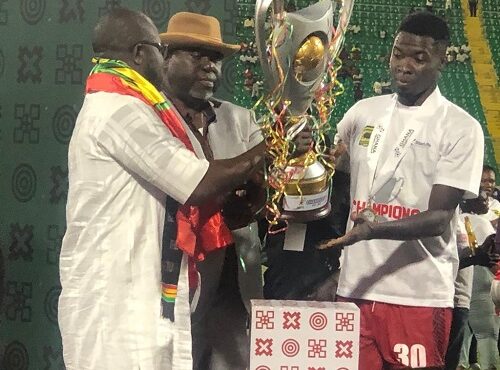 After a litany of controversies and contentions here and there, the 2021/22 Ghana Premier League (GPL) ‘curtained down’ last weekend with Kumas-based Asante Kotoko being crowned champions.

It was the club’s record-extending 25th championship diadem, gloriously clinched with three games to spare.

Kotoko’s arch rivals Hearts of Oak – who were the defending champions finished a distant sixth – and four adrift the new kings, as regards GPL coronets.

The biggest talking point on the weekend was Hearts’ 1-4 home loss to RTU who needed the result badly to survive. Inexplicably, it was the Phobians’ fourth straight defeat, an upshot that raises lots of probing question marks. Certainly, as defending champions, it was an embarrassing manner to surrender the title.

For the first time in eight years or so, the league’s most thrilling side – and the only representatives from the Volta Region, West Africa Football Academy (WAFA), also bade adieu to the top flight as they suffered the drop together with Eleven Wonders and Elmina Sharks.

It was also a season that witnessed one of the most shameful, despicable and probably the most horrifying football scandal that occurred between AshantiGold SC and Inter Allies whose fixed game has landed them in demotion to the lower tier. The two disgraced teams have appealed the decision, though.

Come to think of it, the goal-king came from the beleaguered AshantiGold whose striker Yaw Annor, banged home 22 goals to upstage Kotoko’s Cameroon import Mbella (21).  To allow a club who were ‘sin-binned’ for bringing the game into disrepute to finish the season, in itself was unthinkable.

Anyway, we are told as GPL champions, Kotoko will receive $30,000. This amount, if it is anything to go by, is pure insult.

In other jurisdictions, even in the Sahel and Maghreb as well South Africa, players pocket close to $10,000 each for winning their respective leagues.

When it comes to competitions in Africa, the juicier it becomes, for players from such clubs.

For instance, each WAC of Morocco player received $30,000 for winning the Champion League trophy.

Truth is that our league would have become better if we had a headline sponsor; and this aberration is what managers of our domestic football should be working vigorously on ahead of next season.

If leagues in war-ravaged countries like Somalia, Ethiopia, Sudan and Niger among others, are able to attract major sponsors for their leagues, then it tells you there is something we may not have been doing right!

Is it that the Publicity and Marketing Department of the Ghana FA are dozing off on their job? Difficult to say now; but whatever be the case, the FA and their people must be up and doing.

Premier League Clubs spend averagely GH¢10,000 or more to prepare for games (especially when hitting the road). Multiply this amount by let us say 17 – representing away ties, and that is a massive outlay of cash even for clubs that seem to have some corporate financial backing.

Hope you are not losing sight of the winning bonuses in the mix?

It is much the reason the clubs are compelled to sell off some of their top players midstream in order to survive, ultimately depriving the league of the requisite excitement and thrill.

By extension, our league is increasingly surrendering what is left of it to the lures of foreign football simply because we keep losing our marquee players day-in-day-out!

As we have hammered number without end, nobody goes to the stadium to watch no one! At least, one stimulating player got to be the charm to pull the fans.

Perhaps, it is against this saturnine backdrop that former President of the GFA and now chairman of the Premier League Management Committee, LepowuraAlhaji MND Jawula, has sworn to do all in their power to get the premiership a mega sponsor before the new season rolls off.

Fetching a headline sponsor for our league is a sine qua non that has been taken for granted for a long time. It must not be the case!

However, we must also not lose sight of the fact that without organising a clean, well-managed league of integrity, no sponsor would be willing to come aboard.

Of course, no sponsor would want to be associated with a scandalized league, and our FA must work unremittingly to flush out that mortifying tag.