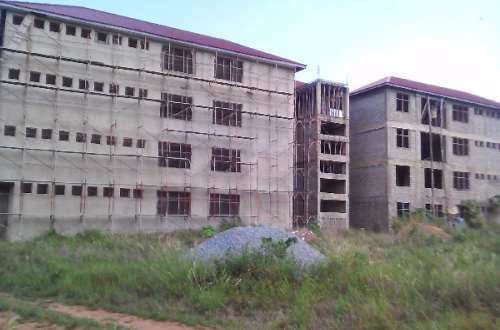 Monuments of all types abound in Ghana. We have the slave castles, forts, national parks, and all kinds of important relics that remind us of our history, arts, culture, and other aspects of our national life. Good stuff. Besides, they earn us some money.

I refer here to monuments like the Kwame Nkrumah Mausoleum, the slave castles and forts, the Kakum National Park with its canopy walkway which is one of just three such eco-tourism attractions in Africa, our beach resorts, waterfalls, and many more, not leaving out the recently refurbished Ghana National Museum in Accra.

But these are not my concern in this article. I am thinking about another kind of monument which has earned Ghana as much notoriety as those listed above have earned us fame. The monuments I have in mind evoke a sense of anger, disappointment, and even shame. Collectively, I designate them as a monument to neglect.

These include infrastructural projects that have been abandoned mid-construction, left in ruins, at the mercy of the elements, and begging for attention. They have become white elephants, so to speak.

They come in all shapes and forms – construction projects including housing schemes, educational and health facilities, factories, sports amenities, roads, and highways. Very lofty and laudable projects one may say.

They are announced with pomp and pageantry. Chiefs of the project areas and other dignitaries, including ambassadors of sponsoring countries grace the occasion, and political speeches are made about who is doing better than who.

The date of completion is boldly announced, expectations are raised, and work begins in earnest. But before long, the projects are abandoned midway through construction. For what purpose are they started at all? To tickle our fancy? If they are more trouble than they are worth, why start them in the first place?

I still do not get it. I do not know why we sign contracts for specific projects, sink substantial sums of money into them only to leave them to go waste without any scruples. Why? How could we be so cruel as to dissipate funds we borrow for such projects in such wanton manner?

If it were your own money, would you waste it like that? Even the prodigal son who wasted his share of his father’s estate, realised his mistake, and picked up the pieces. Not so with Ghana. From Nkrumah’s time, any change of Ghana has led to abandonment of on-going projects. Even incumbents abandon their own projects.

Upon reflection, I think I know the reason. It is a deadly combination of criminal negligence, apathy, ignorance, and insensitivity on the part of the managers of our scarce resources conspired to turn otherwise valuable and enviable projects into useless structures.

We do not get any use from them, neither can we siphon our investment and direct it to other profitable ventures. Our money is just squandered and that is it. No qualms about that. Really? Yes, if anyone cared, heads would have rolled all this while to serve as a deterrent to the callous perpetrators of such nefarious crimes against the state. Saboteurs! That is what they are.

Needless to say, projects that are started and never completed, devour a huge chunk of our scarce national resources. Some analysts believe that such abandoned projects consume as much as a tenth of Ghana’s capital expenditure and then are left to go to waste.

Other experts are not so charitable. They reckon that abandoned projects account for as much as a fourth, or even a third of Ghana’s capital outlay, only to reap losses because any potential gain evaporates into thin air due to the uselessness of the enterprise.

Whatever the percentage, one thing is without controversy. We are losing scarce resources and we do not seem to have any clear strategy to stop the drain. Some examples of such dissipative expenditure on abandoned projects will serve to place the magnitude of this fiscal waste in the right perspective.

The multi-million-dollar Saglemi Affordable Housing Project at Prampram, initiated by the previous administration of the NDC now in opposition, readily comes to mind.

The project sits on a 300-acre land and comprises a 5,000-unit residential facility to accommodate middle and low-income earners within Accra and its enviros and reduce the housing deficit in the metropolis.

When the NDC left office in 2016, the first phase of the project which consisted of 180 blocks with 1,500 residential units, had been completed at the cost of $200 million.

But due to allegations of financial impropriety in procurement and inconsistencies in contract documents handed over by the previous administration, the ruling NPP led government has left the contract in abeyance.

Besides, no allocation of the completed flats has been made, and the people for whom the project was undertaken, are the worse for it.

In fact, a recent documentary on the project depicted a sad story of deterioration of parts of the project. Glass windows and other amenities like fixtures in the kitchens and bathrooms had been damaged and the lawn overgrown.

Greatness has been showered on us by Providence, but we do not seem to believe in ourselves. We have been endowed with everything it takes to be among the greatest nations on the planet. Dr. Nkrumah proved it with gigantic infrastructural projects to put Ghana up among the stars.

That gave Ghana the confidence to boast about being unprecedented leaders in so many fields. After him, we have continued to lead the way, but we are only trailblazing in reverse. Nkrumah’s slogan: “Forward ever, backward never,” has been turned on its head.

The American author and publisher, Samuel Langhorne Clemens, better known by his pen name, Mark Twain, says:“Twenty years from now, you will be more disappointed by the things that you didn’t do than by the ones you did do…Explore, Dream, Discover.”

Ziad K. Abdelnour, a Lebanese-American investment banker, financier, author, and activist famously said: “Words are useless without action. Stop fantasising and just DO it. Be a game changer or get played like an idiot.” In other words, deeds, not words.

The empty platitudes and political rhetoric must give way to concrete programmes to produce positive change for Ghanaians to reach the sky where they really belong, where eagles tread.

To reach the mountain top is a long and arduous journey. But how we climb the mountain is more important than reaching the top. It will take time but if we plan well, we would not start a project without much reflection and abandon it at great cost to the nation.

Thirty-eight-year-old successful American entrepreneur, Ryan Allis who started his own digital company, Allis Computing at age 11, shows us the way, if only we would be humble enough to borrow a leaf from his proven principles.

He says: “Have the end in mind and every day make sure you’re working towards it.”