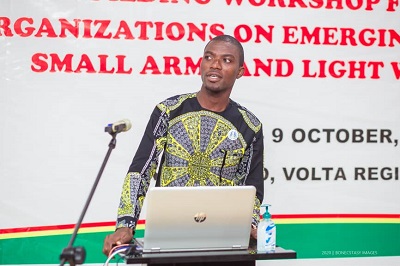 The Good Book, in Matthew 5:9 describes peacemakers as children of God and this description definitely covers unique people who have the characteristics of reconciling people and making peace in society for unity: Mr. Abraham Korbla Klutsey fits perfectly into that category of people.

In his efforts to support, peacebuilding and reduce conflicts for the development of Ghana and Africa at large,  Mr  Klutsey  founded the Youth for Peace and Security Africa, YPSA.

The YPSA, which was registered in Ghana in 2012 as a non-profit organisation has ‘Safe and developed Africa’ as its vision runs with the slogan, ‘making Africa safer for better development’.

He told The Spectator that, though he wanted to be a pilot or scientist in future, he had no regret as a conflict mediator and peace building agent as saving lives and maintaining peace have become his preoccupation.

The approach employed by the YPSA to ensure that there is a minimal to zero financial cost in peacekeeping missions are the following: There should be no danger to the lives of peacemakers, and there should be a prompt action to prevent injuries, loss of lives, and damage to properties.

The team engages the inhabitants of communities in a coordinated network, equip them with basic skills and responsibilities to prevent and resolve violent and bloody conflicts as well as crimes in their own communities.

“Because the people live in the communities, it comes at no extra cost and danger acting as peacemakers. They, therefore, maintain peace promptly, safely, effectively, and at low or no cost. When people feel involved in the process, they stay involved for the long term”, he said.

In 2013, during tension and violence in the century-old Alavanyo and Nkonya bloody conflict, in the northern-Volta of Ghana, YPSA responded to help the people lay down the foundation for a lasting peace and also to prove the efficacy of its underlining operational mechanism in preventing and resolving violent conflicts.

And with the active inclusion of the people, a roadmap was drawn for a lasting peace and development to end the conflict. For this timeous progressive move by the organization (YPSA)

The Biakoye District Assembly’s recommendation highlighted the major progress and success made during the project. The Council of State of The Republic Of Ghana in 2015 made findings into the project and concluded in it report that YPSA has the capacity and the potential to make a useful contribution towards the restoration of peace in conflict zones.

Mr Abraham Klutsey was given the with Ghana Peace Award. In 2016 and 2018 where the Executive Director of YPSA was invited by ECOWAS-GIABA to participate in efforts towards tackling terrorism and financial crimes in West-Africa. These  for a were held in the Republic of Benin and Senegal.

In 2020, he was again by the Small Arms and Light Weapons Commission of Ghana to a forum on tackling proliferation of arms in Ghana.

During the 2020 general election of Ghana, the organisation launched the ‘Stop the Violence before It Happens’ Project recruited Safety and Peace Ambassadors across the country to prevent electoral violence in their respective communities.

In 2021, YPSA has initiated a project in the Alavanyo and Nkonya communities to expand, strengthen and train the existing networks to make sure violence never returns to the communities even if issues remain unsolved.

Youth for Peace and Security-Africa (YPSA), through its networks, now has members and volunteers in over 25 African countries. The organisation has branches which are registered in Ethiopia and Nigeria. YPSA believes that Africa can attain social stability and development if the vision and resources of the youth are harnessed to prevent and resolve violent and bloody conflicts.

Mr Abraham Kobla Klutsey He hails from Apipe in the Volta Region and attended Saint Paul’s Secondary School, Denu at 2004 and holds a Bachelor of Science degree in Computer Science and Mathematics from the University of Ghana.

Mr Klutsey has authored a book “Peacebuilding at the Edge of Death” which is listed on amazon.com.