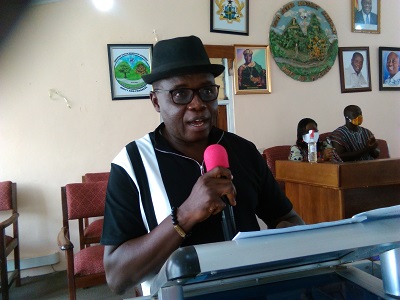 The Abuakwa South Municipal Chief Executive, Kojo Ofori-Safo, has assured residents of the assembly’s commitment and readiness to improve on the Internally Generating Fund (IGF) of the assembly in spite of the COVID-19 pandemic.

He appealed to assembly members to support and assist in efforts by the assembly to plug loopholes in generating funds to improve livelihoods of residents through growth and development projects.

Mr Ofori-Safo said the assembly had done quite well despite challenges including the COVID-19 pandemic and enumerated completed and ongoing projects in all sectors including education, security, health, sanitation, local governance in communities in the municipality.

He gave the assurance when he addressed the first Ordinary meeting of the first session of the 8th Assembly of the Abuakwa South at Kibi in the Eastern Region on Friday.

Mr Ofori-Safo also spoke extensively on the COVID-19 pandemic and sanitation and called on assembly members to help educate and sensitise residents on the need to stop stigmatisation, and adherence of safety directives of health authorities.

He asked security services especially Ghana Immigration and Police Services in the municipality to devise means to deal with illegal migrants who are not willing to comply with mining regulations of the country in the mist of COVID-19 and urged them to take legal action against landlords who accommodate such migrants in their households in the municipality.

He appealed to the assembly members to assist the security services to flush out those illegal migrants from the municipality because they were becoming a threat to the environment especially those from West African region who had colluded with some of the youth in the area and brought in sophisticated equipment to exploit the environment at an alarming rate.

“The influx of illegal migrants in the municipality has surged illegal mining (galamsey) to worrying levels with its attendant damage to the environment despite the assembly’s best efforts, including advocacy by Okyenhene’s Foundation, the youth continue to engage in galamsey with impunity which has worsened galamsey menace when they engage in business which has made it difficult to contain the situation,” Mr Ofori-Safo noted.