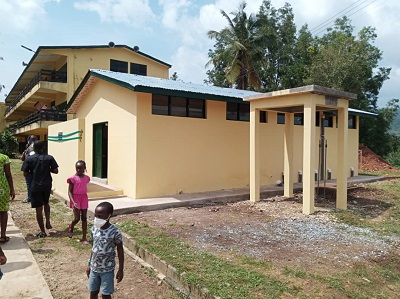 As part of their 20th anniversary celebration, the 1999 year group of the Abuakwa State College (ABUSCO) has handed over a 12-seater toilet and mechanised borehole to the school.

The facility which cost over GH¢46,000 was donated by the group, in collaboration with The Joseph Assignment Global Initiative, a non- profitable organisation.

The facility was to create convenience for the students who initially faced inconveniences during class hours due to inadequate toilets near the classrooms.

At the anniversary and handing over ceremony, the president of the 1999 year group, Madam Abena Kesewa Ohenegyan explained that the group, after 20 years of leaving school, thought it wise to give back to their alma mater.

“Most of us after school had not been here for a long time but after we formed the group in 2017, we decided to come back to assess the needs of the school so that we can help the institution which has contributed to what we are today,” she said.

She added that, after the assessment, the group realised that providing the toilet facility would meet the pressing needs of the school hence their coming together to help.

“We provided the toilet facility, and also collaborated with the NGO which we solicited funds from to provide the mechanised borehole while we added up few things to finish it.”

On his part, the Assistant Headmaster, Mr Gabriel Ansah Asare expressed management’s appreciation to the 1999 Year Group, stating that, the school would ensure that they maintained the facility.

He said initially, due to inadequate toilets near the classrooms, students had to resort to the use of the ones in their dormitories during class hours.