Ada women kick against commissioning of mortuary near salt lagoon 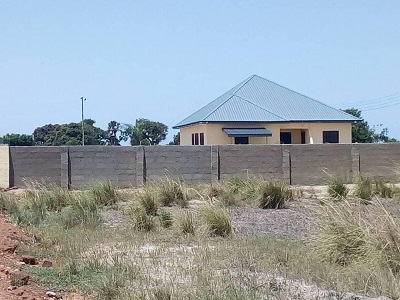 The Association of Women in Salt Mining in Ada-Songor is kicking against the commissioning of a mortuary near the salt lagoon in the community saying the gesture will jeopardise the market for Ada Salt.

The salt miners are, therefore, suggesting that, the facility be converted into a cold store.

The women in the communities kicked against the location of the facility because according to them it is a drainage into the Salt Lagoon and also a cemetery for the Anyamam community.

President of the association, Madam Mary Akuteye blamed traditional leaders and government representatives for turning a deaf ear to the plight of the people.

According to her, it is forbidden to cross the lagoon with a dead body.

She said, “If it happens inadvertently, it demands ritual purification to appease the gods before the lagoon will crystalise salt again. We hold the view that, waste water from the mortuary will seep into the lagoon.”

“We believe that, the location of the mortuary is a danger to the salt market: locally, nationally and internationally.”

Speaking to Mr Woliatse Raymond Abayateye, the chief fisherman of the community who gave the land for the construction of the mortuary, he explained that, several years ago authorities of the Battor Catholic Hospital, consulted the chiefs and people of the coastal communities for a piece of land to establish a hospital but they declined the offer.

“Posterity will judge me if history is repeated. Battor Catholic Hospital management needed a land to construct a mortuary for communities along the Sege coastal communities so I offered them land,” he added.

The demand for a mortuary is due to the increasing number of corpses from the coastal communities.

The Ada District Chief Executive (DCE), Mr Adjoteye Lawerh Akrofi said, “The Environmental Protection Agency (EPA) in the district and regional team has certified and given clearance for the project.”

Their shouts will rather publicise the salt wrongly in the market,” he added.

Meanwhile, , Monica Kuadzo-Gbor, a management member of the Battor Catholic Hospital said, prevention was their priority as a health institution, therefore, measures have been put in place to ensure social, economic and environmental safety.

The salt lagoon was the source of life for many people in the Ada state.