Adhere to safety protocols to fight COVID-19 – Omanhene of Berekum 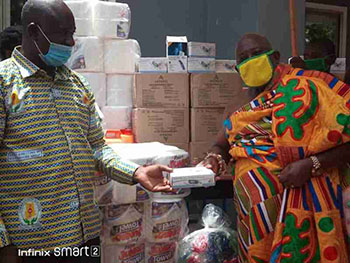 The Omanhene of Berekum, Daasebre Dr Amankona Diawuo, has urged residents in the Bono Region to strictly adhere to the safety protocols to fight the COVID-19 as the region recorded its first confirmed case.

The Omanhene said he was worried that some residents, drivers and operators of tricycles, popularly called ‘pragyia’, were not attaching seriousness to the observation of COVID-19 safety protocols.

Last Wednesday May 6, 2020, the Bono Region recorded its first positive case of COVID-19 at Sampa in the Jaman North district by a Togolese national who was in the company of some other foreigners who entered Ghana illegally.

Daasebre Dr Amankona Diawuo, who is also a surgeon at the Regional Hospital in Sunyani, said in an interview in his palace at Berekum in the Bono Region that discussions were underway between the Police and the Berekum Traditional Council to arrest and sanction any resident who flouts the safety protocols, especially in relation to the wearing of nose masks and the observation of physical distancing.

Berekum is one of the largest cities in the Bono Region where tricycles, popularly known as ‘Pragyia’ are the major means of transport.

The Bono Regional Co-ordinating Council recently banned the operations of ‘ pragyia’ in the region but lifted the ban after about a month and instructed that each tricycle should carry a maximum of two passengers, who together with the operator must be in a nose mask at all times.

A visit to the Central Business District of Berekum, showed number of passengers and operators of ‘pragyia’ not wearing nose masks, a situation the Omanhene described as worrying.

He said it was about time residents realised that the coronavirus disease was real and could infect anyone, regardless of one’s status in society.

Meanwhile, the Omanhene has presented assorted items worth over Twenty-three Ghana cedis to the Berekum Municipal and Berekum West District offices of the Ghana Health Service for distribution to the various health facilities in the two districts.

The items included 1,000 pieces of nose masks, 600 bottles of hand-sanitiser, ten boxes of hand gloves, 12 pieces of infrared thermometer and 10 packets of tissue paper and ten gallons and 20 Veronica buckets.