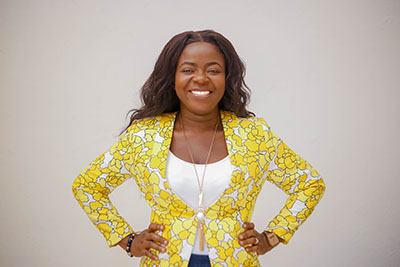 Unveiling the song which came with an amazing music video, she said she owes her music career to the celebrated music trio.

Speaking to The Spectator, at her unveiling on Wednesday at Sunlodge Hotel at Tesano in Accra, she said her maiden single was dedicated to the trio because they had been there for her.

Afia Sika revealed to the paper that she was discovered by Daughters of Glorious Jesus at age 10, and they nurtured her to the extent of gracing numerous stages together with them.

“I have been with them since I was 10 years old, they saw me singing at a programme, and they discovered me and made me who I am today,” she said.

According to her, since then, they have become her backbone in the music industry and even helped in arrangement of the song, and directed her in many ways.

“When I was done with the song, I took it to Maa Cynthia to go through and direct me. I have learnt a lot in ministry from them and this is to say thank you,” she added.

Touching on the message in the song, she said it is to inspire children of God to be patient and prayerful in all their endeavours.

She added that there was an album in the pipeline, but before that she would release another single.

On their part, Daughters of Glorious Jesus who were at the unveiling blessed Afia Sika and urged Ghanaians to support her just as they have been doing for the group over the years.

“Afia Sika comes from the Double D2, that is the Daughter of Daughters of Glorious Jesus, we want everyone to support her and the Lord will bless you for the support,” they said.