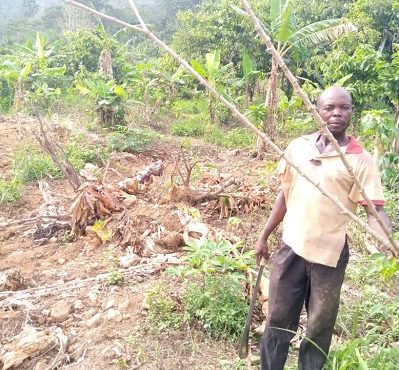 Aggrieved farmers at Saamang in the Fanteakwa South District in the Eastern Region have appealed to the Ministry of Lands and Natural Resources to prevail on BSD Mines to stop their illegal activities or they would be forced to take necessary action that may not be in the interest of the company.

According to the farmers, BSD Mines, a subsidiary of Kibi Gold Fields Ghana Limited, which mines for gold at Saamang in the Fanteakwa South District, has taken its concession beyond borders by encroaching on farmlands cultivated by individuals in the area without their consent.

Pouring out their grievances to The Spectator, one of the aggrieved farmers, Mr Eric Nkum Antwi, owner of Ever Care Venture said the company had destroyed large acres of cocoa, plantain, oil palm, cassava, cocoyam and yam farms among others which were their only source of livelihood.

According to Mr Nkum Antwi, his 1.5 acres of cocoa and plantain farms which employed two permanent and seven casual workers, had been destroyed  by BSD Mines, who also dug dams on the farm without any form of negotiation between him and the company.

“My 1.5 acres of cocoa and plantain farms that could fetch me a substantial amount of  money to feed my family and also pay my workers had been destroyed by this company without approaching me for any form of  either compensation or negotiation.

“No one from the company had come to negotiate any terms with me and to my surprise my workers went to the farm to discover that  more mining  wells had been dug on my farm and   my cocoa and plantain  trees in which I had invested monies have been destroyed,” he fumed.

Mr Antwi also revealed that the illegal mining activities of Kibi Gold Fields Ltd had contaminated the town’s only  source of  drinking water, but the company  compensated each household with only  two bags of sachet water daily, which was woefully inadequate for the survival of  the residents.

Another farmer, Opanin Kofi Sam, also confirmed that his 17.5 acre farm located at Anomaase made up of cocoa, plantain, cassava, palm trees, cocoyam, yam, and vegetables have all been destroyed by the company to extract gold.

He said a Koforidua High Court on May 6, 2020 granted a request made by Kibi Gold Fields Limited who had pleaded for out-of-court settlement, after he had filed a complaint at the law court.

“We met to negotiate on the matter and they asked me to send a proposal to them which I did as requested. They acknowledged receipt and promised to come back but I have since not heard anything from them till now,” he said.

The farmers also expressed disappointment in the traditional authorities for watching on for the company to be engaging in such illegal activities that have the potential of endangering their families into abject poverty.

When contacted on telephone, the Community Relations Officer of the company, Mr Eric Opoku Fordjour conceded  that, their activities had affected some farmers around the concession site.

Meanwhile, he explained that it was not deliberate as speculated by the farmers, adding that, in the case of Mr Eric Antwi Nkum, a portion of his farm was affected when they were clearing a road to the site.

“With Opanin Kofi Sam, we agreed on an amount to compensate him, however, on the day we were to give the money to him, he asked us to go and grant bail for his nephew who had been jailed 18 years for engaging in illegal mining  before he would accept the money,” he said.

He has assured that they would contact the aggrieved farmers and settle the matter amicably.

The aggrieved farmers have, however, complained that they had not received any compensation from BSD Mines.