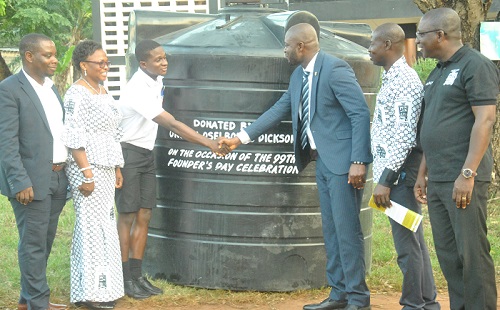 Following many years of legacy and impact, the Governing Board, Management, Staff and Old Students of Accra High School (AHISCO) have commenced series of year-long activities to mark the school’s 99th Founders’ Day celebration.

The groups were mandated by the National Executive Committee of AHISCO Old Students Association (AHISCOSA) on March 7, 2022, to plan and finance programmes outlined for the anniversary.

Mr. Osei Bonsu Dickson, Director Legal at the Ministry of National Security, delivering the keynote address, described his journey through AHISCO as a “fulfilling one.”

He said as the school continued to produce more influential people in society, it was “important for the story of AHISCO to be told” as it prepared for the years ahead.

He said the advancement in technology implied that the current body of students must be “equipped for the changes that come with the fourth industrial revolution.”

To this end, he announced the introduction of a Cyber Security Mentorship Programme which would ensure that students “were not left out of the cyber revolution.”

Mr. Osei Bonsu again urged the students to remain grateful to their Alma Mater and maintain “a sense of pride for being part of the ‘Onukapai’ family,” adding that continuing students should tap the expertise of mentors whenever they were at the “crossroads.”

Madam Evelyn Nabia, Headmistress of Accra High School, in her address, also stressed the need to consolidate the progress made by the institution over the years.

“Starting with eight students, the student population currently stands at 2,636. Our school after many decades will go through a new phase and we need to build upon what the founding fathers have done,” she said.

She praised the old students for the support they continued to provide and encouraged them to engage the government to ensure more developmental projects were implemented to help expand existing infrastructure in the school.

Real Admiral (rtd) Muhammef Munir Tahiru, Chairman of the occasion, also urged the various year groups to “keep up the can-do spirit” and continue to impact the school and society positively.

“AHISCO was not established to serve itself; it was established to be a leader. Compared with other schools, we were given the least but we continue to prove that we can do it better than anybody else and have no doubt that we will continue to be the best,” he said, and called on AHISCODIANS to turn out in their numbers for the Centenary launch and celebrations.

The occasion which attracted hundreds of old students saw the induction of executives of the 1999 and 2003 year groups. The 1972 year group donated 20,000 litre polytank while the ’85 year group is also sponsoring the construction of a mechanised bore hole for the school.