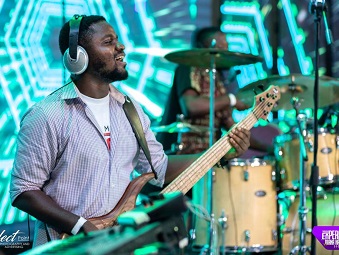 Gospel Instrumentalist and musician, Barima Okyere has spoken about how much Ghana’s gospel reggae singer, Akesse Brempong’s songs really bless and inspire him when he listens to it.

“Akesse’s songs are mind blowing. They really inspire and bless. I love playing with him when the opportunity sets in”, he said.

As one of the recommended instrumentalists on the gospel music scene in Ghana, Barima is quite particular about branding and is selective about quality music.

He believes that as an artiste or personality, it is one of the best ways to grow your production for the market.

In an up-close Interview with social media personality, Skbeatz Records and monitored by The Spectator, when he was asked about his relationship with Akesse, he said, “Akesse is a big bro and boss. He is down to earth. I love working with him. I play the bass for him on number of occasions when we meet.

“Akesse’s songs are really good; talk of his recent album ‘Heal Our Land’ album. Playing with him on same stage is such a privilege”, he stressed.

Barima further admitted that the ‘Crazy Love’ hit is a strong asset in the Ghanaian gospel fraternity and that he deserves praises.

“My crew and I have plans to even organise a tribute for Akesse. Preparations are on-going”, he said, and indicated that it was best to celebrate and appreciate people while alive.

Over the years, the Basically Worship brand has been very relevant and supportive, as a bassist for various artistes such as Kofi Owusu Peprah, Francis Amo, the Blood Crew, Joshua Ahinkorah, Nii Okai and others.

He is yet to release his own projects to bless the world.

“People should watch out. There is something coming up from the camp of the Basically Worship Crew”, he said.