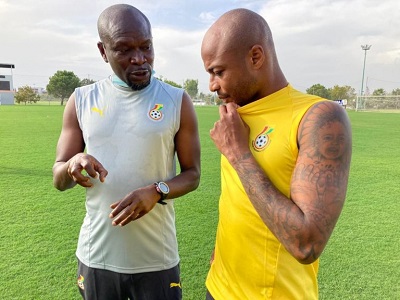 Ghana’s sweat merchant, Charles Akonnor, may have been walking a tight rope on the opening day of a friendly engagement against Mali in Turkey. He may have had the Sword of Damocles hanging precariously around his head. But suddenly the danger has eased, and all appears to be on course again.

At least, so it seems!

The trigger was simple. First, the Black Stars were mauled 3-0 by the Eagles of Mali in the first of an international friendly game that saw the latter enormously dominate, forming rings around the Andre Dede Ayew-led team to the chagrin of Ghanaians. It was a day the entire team – including Arsenal new sign-on Thomas Partey – failed to gel.

Akonnor stood baffled after the game. He looked mystified, stupefied and bamboozled. It was a baptism of fire for the former captain of the Black Stars who took over from Kwasi Appiah in January, this year.

Indeed, the general attitude of the boys against Mali was lethargic and they played as though there was absolutely nothing as stake. Maybe, there were no points at stake to be won; but there was pride – there was the nation’s reputation on the line, there was bragging rights!

Above all, the overall organisation of the game was miserable as one found it pretty backbreaking to decipher the kind of formation Ghana was playing. It was pattern-less pain of football.

Unsurprisingly, Akonnor was subjected to a barrage of criticism. He was dragged to the cleaners, whilst some of the cavilers hoped he would improve in his next game against current Asian champions Qatar.

As many may have predicted, Akonnor and his charges got it right this time around. The coach effected five changes to the squad that bowed shamefully without a fight against Mali as they plotted the fall of Qatar in the second friendly.

Erratic goal-tender Razak Abalora gave way to Lawrence Ati-Zigi, while youngster Benson Annan operated at right back with Gideon Mensah maintaining his place at left back. Alexander Djiku who was deployed in a midfield position against Mali, moved to central defence to partner Joseph Aidoo. Djiku and Aidoo played in the heart of defence in place of Nicholas Opoku (injured) and Kassim Nuhu Adams.

Saudi Arabia based winger Samuel Owusu ‘snaked’ his way into the starting line-up to play on the right-wing of Ghana’s attack in place of Eugene Ansah. New-man Tarique Fosu operated on the left wing with Captain Andre Ayew playing in the hole behind striker Jordan Ayew.

The changes paid off staggeringly as the Qataris were whitewashed 5-1 after a one-one draw opening half. It was just not the first win for Akonnor that mattered most; on the night, the Stars demonstrated a great derring-do and played as if their lives depended on the outcome of the enchanting game.

Indeed, that is how Ghanaians wanted the Stars to play against Mali; even with a mortifying defeat staring them in the face, the boys were expected to demonstrate some fight – ferocious fight!  Sure, they must be prepared to die out of exhaustion rather than give up. That is the true spirit of champions.

The last time Ghana recorded such massive victory was against Congo Brazzaville (5-1) in a Russia 2018 World Cup qualifier three years ago in enemy territory – that saw Partey strike a momentous hat-trick. That is how come the newly-signed Arsenal combative midfielder became a house-hold name in Ghana.

As typical of Ghanaians, some are trying to make mockery of the Qatar win, insisting that the 2022 World Cup hosts were mince meat, or put more befittingly, not a ‘serious’ football nation. That is Ghana for you! If the Qataris had beaten the Stars, a far different story would have been told of the coach, his surrogate and all including the Ghana Football Association (GFA) President, Kurt Okraku.

Let us try to give credit where it is due.

More importantly, though, Akonnor must be guided by some of the horrendous mistakes the Stars committed in the two games and promptly make the necessary corrections before their next continental assignments against Sudan and South Africa, next month.

Ghana, leaders of Group C, engage Sudan at home and South Africa away in a double header of the 2021 African Cup of Nations (AFCON) qualifier on November 13 and 17 respectively. The Stars have garnered the maximum points from the two games played – having accounted for Sao Tome and Principe 1-0 away before ditching South Africa’s Bafana Bafana 2-0 at the Cape Coast Sports Stadium.

The four-time African champions are odds on favourites to top the group and make it to the Cameroon 2021 tournament. That looks all-too effortless to predict and that may not be a bother. What is of grave concern is the nation’s disconcerting failure to annex the Holy Grail since 1982 – a stunning 38 years ago.

It is really a torturous shame that we have not been able to clinch the continental rubric all this while. Sad to say that Cameroon had not even won a single trophy in 1982 when Ghana was gallivanting on four; now they have whisked pass the Stars with five coronations.

Egypt had only two coronets in 1982. Today, the Pharaohs are seven-time African champions! Where is Ghana? Sleeping, right?

Strenuous efforts to lift the Golden Fleece have exploded into thin air of disappointments. Today, supporting the Black Stars is a penance one has to bear – and this is the gloomy picture the Okraku administration has promised to change.

Well, we will continue to give the FA and the new Stars our backing, but would not hesitate to drag them to the guillotine when they mess up.

Ghanaians are now sitting on anxious expense and continue to wonder when the disturbing Stygian silence would be broken as regards the coronet. It is really pathetic. It is a heart-rending bother!

As we wish Akonnor and his charges well, let them be reminded that it would take their supreme efforts to win back the love. The love will not come if they churn out disappointing performances. Love will come out of love, not hatred.

Bad football generates hatred! When you play some delectable football, you will attract the crowd and the love would follow suit. It is that simple!