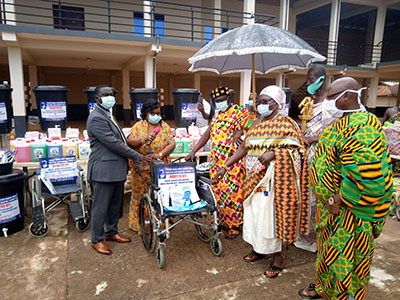 Personal Protective Equipment and relief items worth GH¢45,000.00 have been distributed to some aged, clinics, schools and religious organisations within the Akyem Akrofofu community in the Atiwa West Municipality in the Eastern Region as part of measures to contain the spread of COVID-19.

The PPE were separately procured by the Chief of Akyem Akrofofu, Osabarima Adigye Gyamfi and some citizens of Akrofofu residing in the United States of America (USA) and the United Kingdom (UK).

The items, which were distributed to the beneficiaries at a mini durbar, included thermometer guns, Veronica buckets, gallons of liquid soaps, hand sanitisers, face masks, tissue paper, wheel chairs, and bags of rice, among others.

Handing over the items, Osabarima Adigye Gyamfi said he bought part of the equipment at a cost of GH¢6,500.00 while the citizens in the diaspora also purchased the rest at the cost of USD 5,000.00.

He said that the health of the citizens was a priority, hence the need to give the protective equipment to the people.

“The traditional authority and citizens abroad are committed to ensuring that clinics, schools, and all religious organisations within the Akrofofu community are well protected against the disease,” he said.

The chief stated that though the community had not recorded any positive case of the disease, it was necessary to be proactive and prevent the virus from entering the community.

Osabarima Adigye Gyamfi, therefore, advised the residents to follow all the health and safety protocols to the letter.

Ms Nana Abena Adomah Bonsu, leader of Akrofofu citizens in the diaspora, also said the items were their contribution to the global fight against the pandemic.