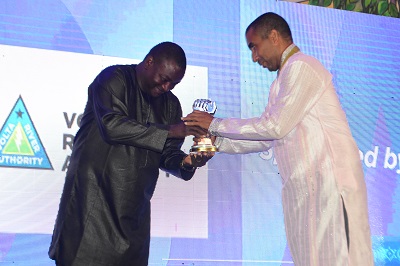 The Spectator’s Alberto Mario Norreti over the weekend was adjudged Best Crime and Court reporter at the just ended 25th Ghana Journalists Association Awards held at the Kempinski Hotel in Accra.

Mr Norreti last year, wrote series of stories exposing a couple who engaged in child trafficking on the Volta Lake.

The stories blew the cover of these illegal activities and brought relief to the children involved, whereas the culprits were jailed.

In a statement read on behalf of the Chief Justice, Kwasi Anin-Yeboah, at the ceremony, he urged the media to exhibit professionalism in their practice to promote the country’s democracy ahead of the general elections.

The Chief Justice also called for an enhanced media ethics in this election season, adding that, “Let’s not indulge in sensationalism. Let’s distance ourselves from misreporting and let’s sanitise our pages and airwaves”.

“I can assure you that the judiciary is committed to media freedom and working with you, indeed, with all of you to grow our democracy and improve the lives of our people.

According to him, relationship between journalists and the judiciary can often take a sour turn and there have been times when they have had to lay down the law and step in to check some of the excesses that are inevitable in any public endeavour such as media practice.

He said, “For journalists, who may have found themselves on the wrong side of a judicial pronouncements, I am here to tell you that it was not personal.”