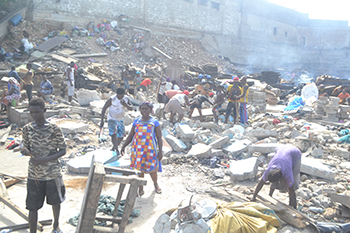 The Accra Metropolitan Assembly (AMA) on Wednesday demolished more than 400 temporary and permanent structures at Jamestown beach to pave way for the construction of a fishing harbour.

The 60 million dollar harbour project is one of the major infrastructure projects of the government.

The Deputy Sub-Metropolitan Security Coordinator of Ashiedu Keteke, WO I Ansah told the Ghanaian Times, the project is expected to commence right after the demolition exercise.

According to him, the project is a Chinese grant and when completed would be of benefit to the whole country.

He said, the project is expected to be completed by the end of next year to enhance national development.

“It was supposed to start this March, but because of the coronavirus (COVID-19) pandemic; engineers of the project had to wait. So by the end of this week, after we’re done with the demolition exercise, the project would commence,” he said.

WO I Ansah said, the AMA on April 14, 2020, issued a letter to notify the occupants of the structures to vacate the place, but they refused to comply.

“Letters have been distributed around, just that they are refusing to comply, you know how human institutions work, but we’ve no option than to clear the site for the contractor to start work,” he added.

Meanwhile, some of the affected victims who spoke to Ghanaian Times said, they were not informed of the exercise, and complained that, government should have relocated them before embarking on the project.