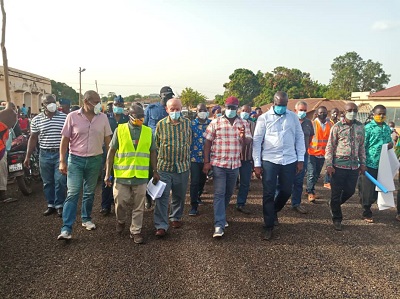 Government is working to deliver 1,056.9-kilometre road network to the people of the Upper West Region before the end of the year.

Also, plans are underway to award additional 474km of road projects to contractors before the end of the year, involving 36 different projects at different locations.

The Minister for Roads and Highways, Mr kwesi Amoako-Atta announced this at a news conference at Wa over the weekend as part of a day’s working visit to the region.

He indicated that the ongoing construction and the planned projects when completed would amount to 26.4 per cent of work done on roads in the region.

Mr Amoako-Atta said that the Ghana Highways Authority was handling 21 different projects; Department of Feeder Roads was supervising 42 of them, whereas the remaining 15 was under the Department of Urban Roads.

He said the president was committed to working on roads in the country, hence had invested largely in that sector by ensuring that contractors were paid on time to encourage them to expedite action on their respective projects.

Mr Amoako-Atta indicated that good road network was a requisite for national development, hence the quest for government to work on all roads across the country.

“It is not a mere coincidence that government has labelled 2020 as the year of roads. Government is tackling all sectors of road construction to meet the high demand for good roads in the country, because road infrastructure is very key in the development of the country,” he explained.

The Minister flanked by his Deputy, Mr Anthony Abeifaa Karbo, the Regional Minister, Dr Hafiz Bin Salih and some heads of departments as well as staff of the Ministry of Roads and Highways toured some projects sites to inspect the ongoing construction of roads.

At Lawra, the Minister and his entourage inspected the broken Dekpe bridge and pledged government’s commitment to constructing the bridge to facilitate trade between Ghana and Burkina Faso.

The minister rounded up his tour at Tumu where he described work done by the various contractors as satisfactory, and called on residents to ensure that road signs were not used as scrap by some unscrupulous people.