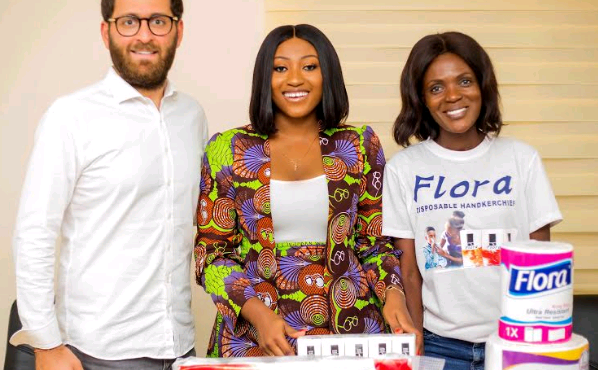 They are television show hostess, Anita Akuffo, and Abdul Waris Umaru popularly known as Comedian Waris. The two are expected to increase visibility and patronage of the ‘Flora’ brand through various activities.

The duration and terms of the contract were, however, not disclosed but the company, announcing the deal last week, said they were selected based on their personality and outstanding performance which “resonates with the brand.”

“Anita personifies style, beauty, and quality and these resonate with Flora which is a premium brand,” the company said in a statement.

Anita Akua Akuffo, with six years media experience, is currently the co-hostess of the popular TV show, ‘Date Rush’, ‘The Ladies Circle’ and ‘Ghana’s Most Beautiful’ on Tv3 Network. She was the second runner-up at Miss ECOWAS Ghana 2012, and a Miss Malaika finalist in 2014.

Comedian Waris on the other hand has been in the entertainment circles since 2016 and released a number of comedy skits via his social media platform with the latest titled ‘Agenda Boys’.

The entertainer, who joined Kantanka TV recently, took to his Instagram page to announce his new role, attracting positive response and congratulatory messages from his followers.

Delta Paper Mill Limited, operating from its state-of-the-art factory on the Motorway Industrial Area in Accra, continues to make inroads with its disposable ‘Flora’ tissue paper which is said to be ‘better than a cloth handkerchief.’

It had embarked on series of initiatives and corporate social responsibility as it aims to broaden its market shares.