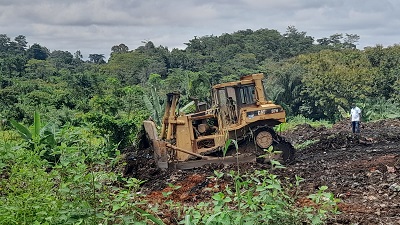 The District Chief Executive of Atiwa East, Mr Kwabena Nkansah Panin has urged Municipal and District Assemblies in the Eastern Region to make cleanliness an important initiative of the assemblies’ activities.

According to him, the nationwide evacuation of dumpsites in the municipalities and districts was a laudable initiative which would ensure good health for people who stayed in the areas.

Speaking to the media during the evacuation of one of the dumpsites at Anyinam in the Atiwa East District of the region, he expressed his appreciation to the President, Nana Addo Dankwa Akufo-Addo and the Ministry of Sanitation and Water Resources (MSWR) for organising the exercise in collaboration with the municipalities and districts.

He noted that the Ministry had undertaken the exercise under the Clean Ghana project and stated that “the government does not only seek to make Accra the cleanest city but want all districts and municipalities in the regions of the country to also benefit from the project.”

The DCE called on people in the district and other municipalities to ensure that they maintained the clean environment after the evacuation so that their communities would create a healthy atmosphere for good living.

Speaking to The Spectator, the Assembly woman of New Jejeti, Ms Vida Appiah said previously, the dumpsites had been a breeding ground for mosquitoes and flies which caused residents to fall sick of malaria, cholera among other diseases.

“The evacuation of the dumping site is a huge relief to us and we would ensure that we maintain the environment and continue to keep it clean to prevent us from getting sick,” she said.

She stated that the site would be used to plant plantain and other crops to support the Planting for Food and Job project.

The MSWR is undertaking the evacuation of dumpsites exercise in other districts of the Eastern Region including Lower Manya Krobo, Kwaebibirem, Abuakwa North, Birim North and Atiwa East.