Apostle Joshua Amissah…philanthropist, teacher and counsellor with a difference 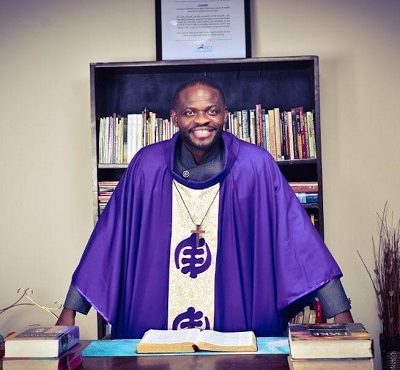 We introduce to you Apostle Joshua Amissah, a philanthropist, mentor, a teacher and counsellor whose work in Christendom continues to reverberate throughout the world.

On two occasions, young Joshua Amissah was brought from Nigeria to continue his education in Ghana. Having suffered this initially, he eventually settled in Ghana and continued his  primary education and later enrolled at Saltpond Methodist High School to read Business programme.

Born on August 3,  about three decades ago to Mr John Amissah and Sophia Mensah, all natives of Saltpond in the Central Region of Ghana and of Methodist and Assemblies of God faith respectively, Apostle Joshua Amissah holds the conviction that in Christ all things go on well and Christians must make the effort to dominate the world. At school, he was appointed the school’s prefect and became one of the best athletes the school has ever had.

Apostle Amissah is a product of the University of Ghana and holds a Bachelor of Arts (B A) in Religions and Philosophy, and Masters in Ministry and Arts from the Philippines  Baptist Theological Seminary.

As part of his calling, Apostle Amissah gave his life to Christ at a tender age of seven and later began dawn preaching through which he deepened his relationship and trust in the Christian faith.

Having had a good Christian foundation, Apostle Amissah became the Organising Secretary of the University Christian Fellowship ( UCF), Commonwealth Hall branch, UCF Outreach Wing which was tasked with evangelism work in secondary schools in the Greater Accra and Eastern regions.

He later became the UCF President and Student Chaplain of the University of Ghana and had the opportunity to serve as the Student’s Representation Council’s (SRC) Arbitration Committee  Chairman.

He said the promises of God were true, hence Christians must cling to the creator of the universe for protection, guidance and care. “Our persuasion is that we must align everything we do with the will of the Lord.”

The man of God has advised Christians to hold on fast to the virtue of humility because of its immense benefits and that Jesus Christ himself practiced this as an example for all to follow.

Apostle Joshua Amissah advises Christians to serve God with sincere hearts, love one another just as Christ has loved them and be prepared to sacrifice a little for their friends.

Shedding light on his infancy, he vividly recalled that one of his greatest tasks as a child was to sell items like Ga kenkey, kerosene, fish, iced water, pastries, mangoes, oranges, fowls, cat and puppies among others.

Apostle Amissah is a consistent conference speaker who dazzles his audience with texts from scripture, and was the guest preacher at many churches and served as a radio pastor for the Ghana Broadcasting Corporation (GBC), Radio Savannah at Tamale.

Some of the churches he had ministered to included the Full Gospel Business Men’s International, the Greater Accra Regional Prayer Convention, Women’s Aglow, universities, secondary schools, and para-church organisations.

He has led many to discover the saving power of  Jesus Christ and subsequently surrendered their livers entirely to the service of God. Miracles, signs and wonders have followed his ministerial works as a true disciple of God.

He was very instrumental in crusades, city and inner city outreaches, seminars, and pioneered the establishment of many groups, some of which included Joshua Amissah World Outreach (JAO), Firm Foundation International (FFI) among others.

Apostle Amissah also reaches out to the inmates of the Nsawam Medium Security Prisons.

He is a philanthropist who has written 64 books, six of which had been published, adopted  three social homes where he regularly visits and supports them with their personal needs, in addition to helping the needy and supporting some young ministers and students from crèche to the university level.

He loves to play games that challenge the mind like scrabble, draft, puzzles and intriguing guess games. He was a very good footballer from primary school to university.

His favourite dishes include banku, yam and fante -fante stew.

The apostle is a man of few words but has thought-provoking messages for his audience, preaches God’s word with ease, he is a counsellor, a mentor and teacher to many.

His hobbies include playing scrabble, draft and puzzles among others.