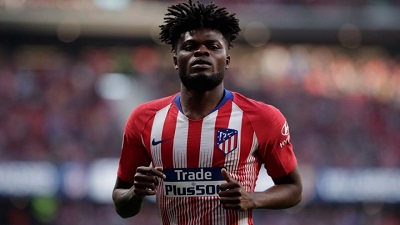 Kwesi Appiah says that his Ghana team-mate Thomas Partey has all the attributes on and off the field to be a big success at Arsenal.

The 27-year-old joined the Premier League side on Monday from Spanish side Atletico Madrid for his buyout clause of £45m.

Appiah, who most recently played for AFC Wimbledon, has played with Partey as part of Ghana squads in recent years and is confident that he is a good fit for Arsenal.

“Under Mikel Arteta, Arsenal is playing a lot of ball possession and playing out from the back and that will really suit his style because he is very comfortable on the ball,” Appiah told BBC Sport.

“Obviously, Spain has a very technical league as well so there is a lot of ball possession and passes being made; so it will suit him very well.

“The top teams in England play that way as well so you are looking at a player who is going to fit in quite easily.

“You look at Manchester United and the way Bruno Fernandes and the way he has taken the Premier League on so I see it as being a similar transition for Thomas.

“He has got that quality and style of play that Arsenal is looking to play so it will be a perfect match.”

Appiah, who played for Ghana as they finished runners-up to Ivory Coast at the 2015 Africa Cup of Nations, also has no doubts he will fit in to the Arsenal dressing room as well.

“He is a very nice guy, down-to-earth and he is a confident guy; he speaks well and he will get on well with the players,” Appiah added.

“There are some personalities at Arsenal that will match his energy and playfulness as well so I am sure he will fit in very well in the dressing room and be one of the leaders amongst the players as well.”

Partey’s journey to Arsenal has seen him work his way up from village football in Ghana to winning European titles and now to the Premier League.

His most successful year so far was 2018, when he won the Europa League and European Super Cup with his former club Atletico Madrid.

Since then he has been a regular starter for Atletico; making more than 40 appearances in all competitions for the Spanish side in both of the last two seasons and was part of the Ghana squad at last year’s Africa Cup of Nations in Egypt.

Those feats in 2018 earned him a nomination for the BBC’s African Footballer of the Year and this is what he had to say at the time about his journey from dusty village pitches in Ghana to European football’s top table.

“It’s not easy for a guy like me to come from a background where I had nothing to be at this level,” says the 25-year-old.

“I started in a small village where my father was the Team Manager. He did a lot of sacrifices which he never told me about.

“It was him selling his stuff to try and get me those new boots.”

The first place he made an impact was at local side in Krobo Odumase in Eastern Ghana.

“He was a good boy, very respectful and would rise up to every challenge,” says Ibrahim Issaka, one of his first coaches. “I knew Partey would become a star because he can play anywhere.”

Partey comes from a long production line of Ghanaian defensive midfielders, where the likes of Stephen Appiah, Sulley Muntari and Michael Essien made their name at the top of European football.

“I tried to be like a ‘stopper’ using the intelligence of Michael Essien, and also attack. I use the strength of Yaya Toure,” he says.

It was Partey’s natural ability that helped him get spotted by Atletico scouts.

He left Africa to join the Spanish side in 2011 – in a secrete journey that even his parents did not know about.

“I got into a car, they took me to the capital, and they gave me my passport and said: ‘Today you travelling,'” he told Marca earlier this year.

“My dad wasn’t at home. Nobody from my family knew anything, or where I was going that day – because if they were told then it would cause a lot of problems. I travelled to Spain and it was six or seven months before anyone realised that I wasn’t in Ghana.”

“As soon as we [the coaches] all saw him, we all agreed that he would be a player of the future,” says Alfredo. “He is a player with an innate talent.”

After loan spells at Mallorca and Almeria, Partey made his Atletico debut in 2015 and improved under manager Diego Simeone’s guidance.

“We all know he’s a great coach, one of the best coaches on the planet. He helped me to adapt to any position he put me in,” says Partey.

He will now be trying to impress Arteta and the Arsenal fans with what he has learnt from Simeone and his determination to continue improving.