Appiatse dead to be buried 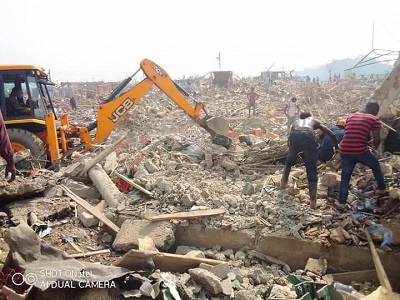 All is set for the burial of those who died tragically at Appiatse on Thursday, January 20, 2022, at about 1:35 pm, when a vehicle carting explosives to a mining site had an accident killing a number of persons in the process.

About 13 people were said to have died on that fateful day along the Tarkwa-Bogoso Highway.

Nine out of the 13 dead bodies would be buried on Saturday, March 11, 2022, which three bodies were being prepared for burial this Friday, March 4, 2022, as announced by the Appiatse Disaster Relief Committee.

In an interview with The Spectator, the PRO of the Committee, Mr Thywill Quarshie said, each family would be given GHc6,000 to cover the cost  of the funeral including coffins which would be borne by the Prestea -Huni Valley Assembly with support from the Ministry of Lands and Natural Resources.

“Families of the four persons have explained that funerals are held in every three months in their  hometowns and the next will be in June, so if they don’t bury their bodies now, it means June and that would mean an extra cost. But, we don’t want that. So, the committee has agreed and approved that they will take their bodies away for burial.” he added.

Mr Quarshie mentioned that burial services for nine other persons would be held at the park( the explosion site) at Appiatse on March 11.

He told The Spectator “We have finally agreed that the funerals would have to be done this month  across board, so that there will be no excuses.”

Meanwhile, autopsy on 13 dead bodies affected by the explosion at Appiatse, near Bogoso, has been completed, the Municipal Chief Executive of Prestea -Huni Valley, Dr Isaac Dasmani, has said.

Dr. Dasmani, who is the  Chairman of the Appiatse  Disaster Relief Committee, indicated that a Consultant Pathologist at the  Komfo Anokye Teaching Hospital (KATH) in Kumasi,Dr. Paul Ossei Sampene, completed autopsy on Saturday, February 12, at the VIP Mortuary at Ayensukrom  No.1, near Bogoso in the Western Region.

“Already,  the deceased were identified by their families on February 4.” he added.

The Spectator recalls that, at about 1.35pm,  on Thursday, January 20, Detective Corporal  Isaac Kamanim of Firearms Unit/Tarkwa,  was escorting explosives from MAXAM Company, Tarkwa, in a DAF van with registration number WR 2252-18, driven by Alfred Pappoe to Chirano Gold Mines in the Western North Region.

On reaching a section of the road between Bogoso and Bawdie, a motor cycle rider from the opposite direction ran under the van carrying the explosives.

“The motor cycle caught fire, ignited the van which burst into flames and exploded. Driver sustained deep cut on the head and was rushed to Government Hospital, Tarkwa. The Police escort escaped unhurt. A number of people including the motor bike rider are feared dead.”  a police report added.

It said, the extensive damage affected a nearby ECG transformer, with a number of nearby buildings razed down while a portion of the road was also damaged.

“Some vehicles plying that road were also damaged with the passengers and inhabitants sustaining  various degrees of injury.” it said.