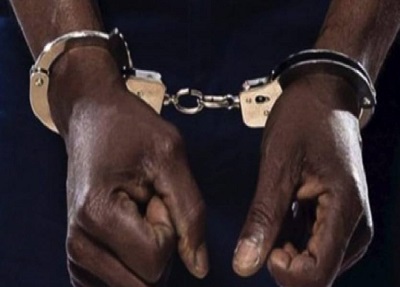 Some young men believed to be Arsenal “fans” expressed their anger on Wednesday at the Kaneshie Magistrate Court premises in Accra when they spotted the 28-year-old suspected killer wearing a T-shirt in Arsenal colours bearing number 69 at the back.

No sooner had they seen the accused, Mr. Richard Appiah coming out from the courtroom in handcuffs and under police escort than they started passing derogatory remarks about his “abnormal conduct” regarding the murder of the two children at Abesim in the Bono Region recently.

“Waa look, the foolish guy is even wearing Arsenal jersey.  He has, indeed, disgraced us. Arsenal fans are not wicked people and you don’t deserve to be part of us: God will punish you for what you have done to these innocent children,” one of them was heard cursing the accused.

As to how the accused got the T-shirt and wore to the court to incur the displeasure of these young men, was a puzzle begging for solution.

Mr. Appiah who made his second appearance on Wednesday regarding his alleged crime, did not have a lawyer when he mounted the dock.

The prosecutor, Chief Inspector Lawrence Anane told the court presided by Madam Ama Adomako Kwakye that post-mortem had already been carried out on two bodies but the police were waiting for the full examination report from the medical doctor for onward transmission to the Attorney-General’s Office for advice.

He humbly requested for a short adjournment to enable them to wrap up the report which the Magistrate acceded to the request and remanded Mr. Richard Appiah in police custody until October 15, 2021, for continuation.

The prosecution had early on read the charges and facts to the accused in open court during his first appearance on August 26, 2021, few days after his arrest at Abesim, Bono Region, but his plea was not taken.

The entire premise of the matter hinges on whether or not Richard had a motive to kill the two children aged 12 and 15 as well as those whose body parts were found in his fridge.