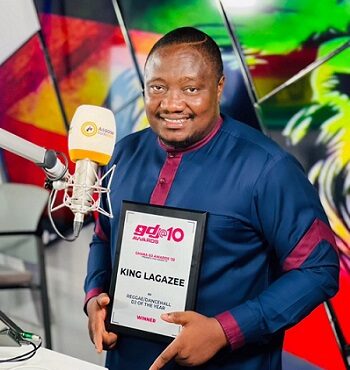 With over two decades of impact in the reggae and dancehall circles, Isaac Ago Tetteh Monney affectionately called King Lagazee has for the sixth time won Reggae/Dancehall DJ of The Year at the 10th edition of the Gha­na DJ Awards.

The award held at the Silver Star Tower saw King Lagazee outwitting other contemporaries of the covet­ed crown.

This becomes his first award from the scheme after joining Asaase Radio this year.

Speaking to The Spectator on the feat chalked, he said, “It’s nothing extraordinary. It’s simply hard work, smart work and staying consistent with the job. Many people don’t put in the works but want to be reward­ed for it. It doesn’t work that way.”

King Lagazee added that “it doesn’t mean my other colleagues aren’t or haven’t been working hard enough. The only difference is I step it up higher and better hence the recognition.”

He dedicated the award to his team, as well as unflinching listeners and promised them memorable times laced with captivating programmes ahead.