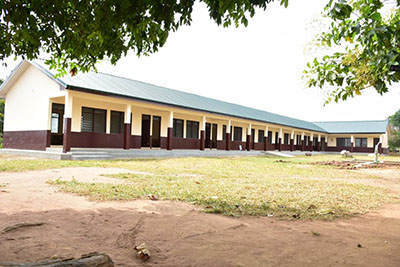 Pupils of the Nhyiaeso Basic School in the Asante Akyem District of the Ashanti Region are beneficiaries of a newly constructed six-unit classroom block and staff bungalow.

The MTN Ghana Foundation project valued at GH¢500,000 would serve about 356 pupils in the area and surrounding communities.

“We believe that children of school going age and those yet unborn equally deserve better opportunities in education at all levels.

“The facility will bring hope and relief to about 184 boys and 172 girls and teachers from Nhyiaeso. It will also serve eight other surrounding communities. We look forward to hearing about high retention in school and increased enrolment,” he said.

A statement following the commissioning indicated that the request for the building was presented to MTN Ghana Foundation board by Ohemeng Tawiah, a journalist working with Joy Fm who chanced upon the school whilst covering a story in the area.

It said pupils in the school had to walk over 20 kilometres to the neighbouring towns to attend school as the existing facilities were in a very poor state.
The provision of the classroom block, the Foundation said, would help eliminate absenteeism on the part of pupils and teachers, and end the long trek pupils had to embark on to access education.

In his remarks, the District Chief Executive, Francis Oti Boateng, commended MTN Ghana for the initiative.

“Comparing this new school with the old dilapidated structure, this is a tremendous improvement. Considering the cost of the structure, it would have taken years for the Assembly to accrue that amount of money to provide such a facility,” he said, and urged other players in the private sector to contribute their quota toward education.

The District Education Director, Madam Mildred Ama Kwakye Agyapong, said the project was a relief and would enhance education in the area, and tasked residents to maintain the facility.