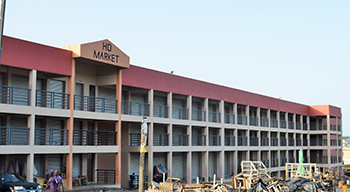 A total of 142 stores are to be constructed at the Ho market in two separate projects which will commence simultaneously in  three weeks, under the Ghana Secondary City Support Programme.

The projects would come with 36 water closet toilets, a banking hall and a post among other ancillary facilities.

The Municipal Chief Executive (MCE) of Ho, Mr Prosper Pi-Bansa, disclosed these to the Ghanaian Times in Ho on Tuesday.

He said that the move was in response to Ho’s status as a rapidly growing municipality, and also to promote more robust business activities in the regional capital.

Mr Pi-Bansa said that the first lot of the project involved the building of 58 stores, whilst 84 lockable stores would be constructed under the second lot.

According to him, seven contractors had put in their bids for the first lot, whilst five had tendered for the second lot.

The projects, the MCE said, were scheduled to be completed in 10 months.

On the project cost, the MCE explained that although the projects would be funded by the assembly through a World Bank facility, the exact cost of the projects could only be determined after they had been awarded on contract.

“We first need to look at the bids and give the jobs to the best qualified bidders,” he added.

Already, the Ho Market has 191 stores and lockable stores.

The fire station, police post and clinic at the market were commissioned about a fortnight ago.