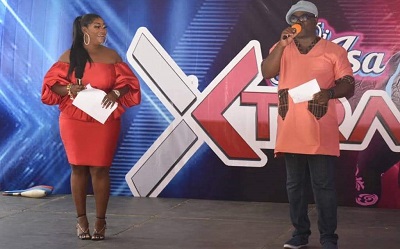 Organisers of plus size dance reality show, Atinka Media Village (AMV), have launched maiden Di Asa Xtra for all finalists who have participated in the competition since its inception.

The show is aimed at reassembling all participants of the competition who reached the last 10 from its beginning. Season One to season Fiver this march.

The contestants would be housed in Accra between 10 and 12 weeks and compete in the weekly eviction shows to pave way for the grand finale.

Speaking at the launch last Friday, at the forecourt of AMV, on behalf of the Executive Chairman of the Tobinco Group of Companies, Elder Nana Amo Tobbin I, the Director of Corporate Affairs, Mr. Albert Kwabena Dwumfour, said, the initiative was aimed at rekindling the bond with contestants of all the seasons.

He revealed that there would be GHC1,000 appearance fee for the about 60 contestants.

Mr. Dwumfour said whoever lost some weight during the weeks of competition would be rewarded.

According to him, they would continuously stay focus to their aim of doing away with stigmatisation and body shaming where plus size people were involved.

He disclosed that contestants who occupied 1st to 5th positions would be rewarded with amazing prices which would be announced later.