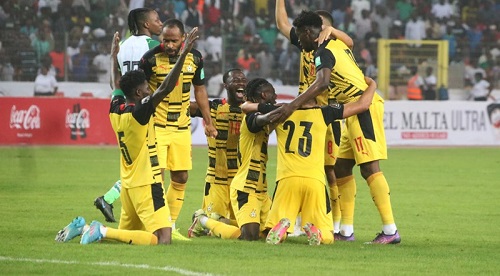 Pockets of Ghanaians across the country were on Tuesday night thrown into delirium when the Black Stars booked their ticket to the Qatar 2022 World Cup tournament.

You know what; the Thomas Partey-led side upstaged no less an opposition than sworn rivals Nigeria’s Super Eagles – who had vowed to flush the Ghanaians out of their way for a seventh World Cup berth.

Indeed, 24 hours ahead of the gut-wrenching tie, the government had announced that public servants in the Nigerian capital of Abuja be given a half-day, whilst free transport arranged from the suburbs to ensure a capacity 60,000 crowd to cheer on the Super Eagles at the Moshood Abiola Stadium.

The directive was obeyed to the letter, and the stadium was filled to the rafters by an intimidating crowd who disrespectfully decided to jeer at Ghana’s national anthem.

Clearly, the Nigerian fans’ behaviour may have infuriated the enterprising new-look young Ghanaians whose stand-in skipper Partey stunned the packed stadium into petrified silence with an 11th-minute right-footed thunderbolt that tore under goalkeeper Francis Uzoho for the opening goal. At that point, even the drop of a pin could be heard by the dumb. Absolute silence!

However, Captain William Troost-Ekong dispatched from the penalty spot after 22 minutes, following a VAR check on Denis Odoi’s challenge on Ademola Lookman. But the Super Eagles failed to score again to keep the game at 1-1 heading into the break.

The second stanza saw a couple of tactical changes by Ghana coach Otto Addo as Jordan Ayew took an early rest. The three changes saw the team switch from 4-3-3 to 3-5-2. This gave them greater midfield control, able to protect their defence and move the ball forward with something approximating to aggression.

As a matter of fact, the team became more stable, resolute, composed, relaxed and impenetrable under pressure from their West African rivals – who had thrown everything at the Stars.

Indeed, Ghana could have killed off the game even before the Tunisian referee’s final signal, had substitute Osman Bukari taken a begging chance from a fierce counter in the dying moments of the eventful half. But never mind, the away goal rule had guaranteed a place for the visitors.

Sadly, the final whistle triggered ugly scenes from the livid home crowd who did not believe what they were seeing. The incident left the image of African football badly bruised.

As a matter of fact, Nigerian security forces had to fire tear gas to disperse the angry fans who stormed the pitch, obviously in reaction to Nigeria’s failure to qualify for Qatar.

The fans plunged into a demolition mission – smashed benches and anything in sight, while others chanted “Pinnick must go! Pinnick must go!!,” referring to the president of the Nigeria Football Federation (NFF), Amaju Pinnick.

Black Stars players and Ghanaian journalists had no choice but to take an Usain Bolt-like sprint into the tunnel and straight into their dressing room for safety, cutting short their celebrations.

The man who engineered Ghana’s famous qualification, Otto Addo – and his technical team, deserves lots of plaudits for fashioning out a system that caged all Nigerian forwards including the dangerous Victor Osimhen. Addo has been around for barely a month but shown great derring-do in team building. Of course, coaches CK Akunnor and Serbian Milovan Rajevac were all part of the qualification process and cannot be forgotten to carving a return to the World Cup, after missing out on the Russia edition in 2018.

After that dismal showing at the Cup of Nations in January, with the embarrassing loss to minnows Comoros condemning them to a humiliating first-round exit, Tuesday’s Qatar qualification in Abuja, should give Ghanaians something to cheer home about.

This present team is showing more desire and passion than what we saw at the Cameroon Nations Cup.

Whilst we congratulate the entire team and the President of the Ghana Football Association (GFA), Kurt Okraku, for a good work done, let us begin to sit and plan for what lies ahead of us in Qatar.