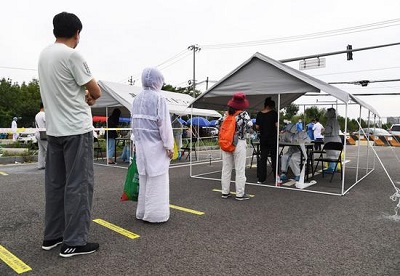 Beijing is conducting extensive COVID-19 screening, with its daily testing capacity reaching over 90,000 samples, as the Chinese capital works to stem new indigenous cases that have emerged in the past few days.

The city reported 79 confirmed domestically transmitted COVID-19 cases from June 11 to 14, most of which were related to the now-closed Xinfadi market, a large wholesale market of fruit, vegetable, and meat in Beijing’s Fengtai District, according to the local health commission. The city has conducted tests on people in contact with the market as well as in nearby communities, and strengthened control measures in efforts to contain the spread of the virus.

Beijing has expanded the number of nucleic acid testing institutions to 98 with the capacity to test over 90,000 samples daily, the Beijing Municipal Health Commission said at a press conference on Monday.

Compared with around a month ago, the number of testing institutions increased by 31 while the testing capacity increased by 42,000 samples, according to statistics given by the commission. On Sunday, the city conducted nucleic acid tests on 76,499 people, with 59 testing positive for COVID-19, according to the press conference.

As of 6am on Monday, 193 sampling sites had been set up across Beijing to facilitate nucleic acid testings, said Gao Xiaojun, spokesperson for the municipal health commission.

More than 8,000 dealers and workers at the Xinfadi market have received nucleic acid tests as of early Sunday and been put under medical observation, Xu Ying, an official with the Beijing municipal committee of the Communist Party of China, told the press conference on Monday.

About 200,000 people who had visited the market since May 30 were interviewed via door-to-door inquiries, calls, social media platforms and other methods. Nucleic acid tests for these people are underway while they are asked to stay at home for medical observation, Xu added.

Beijing has required medical institutions across the city, especially 79 institutions with fever clinics, to conduct nucleic acid and antibody tests on all fever patients and strengthen epidemiological investigation.

Nearly 100,000 workers in 7,120 residential communities and villages have thrown themselves into the battle against the disease, Xu said. -Xinhua