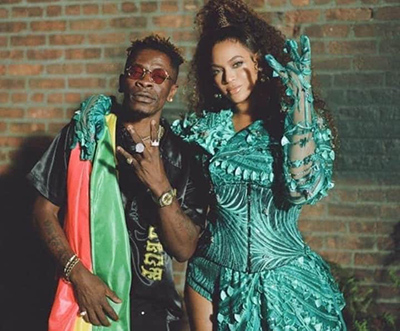 There are some many opportunities, be it tangible and intangible which come with music collaboration on a global stage, and there is no doubt that collaboration with an international artiste has the tendency to increase bandwidth of listening audiences and throw more spotlight on an artiste as well as industry.

Music collaboration is when two or more creative artistes come together to produce a musical project.

There is no denying the fact that the recent collaboration between American superstar Beyoncé and Ghana’s Shatta Wale is a huge achievement and a good omen for the country’s music industry.

The release of the official trailer for her upcoming film “Black is King” featuring Ghanaian dancehall star, Shatta Wale has received millions of streams across various digital music platforms in the world.

Beyoncé had earlier stated that by this visual album, “I wanted to present elements of Black history and African tradition, with a modern twist and a universal message, and what it truly means to find your self-identity and build a legacy,” she said.

Against this backdrop, we take a critical look at some of the benefits which could be derived from this collaboration.

There are many facets of the music industry, comprising music producers, singers, songwriters, audio engineers, videographers, photographers, video vixens, music marketers and media among others.

If you take a look at the trajectory surrounding the project, the featuring of Shatta Wale has led to other crop of professionals in the music industry seal deals and performs other functions in the making of the music video, and tapping of complementary skills and ideas to improve their professional knowledge.

Subsequently, this would lead to facilitation of other deals with its far reaching effect on others in the music ecosystem for the years to come, since the job done would serve as reference point for recommendations.

Finally, it would open more collaborative opportunities with other artistes in the future, by urging others to push beyond their limit and aim higher.

This will certainly lead to massive rise in online streaming, social media profiling of Shatta Wale, and subsequently a spill-over effect on Ghana’s music industry.

This is because the global media platforms who have and would continue to review the project will mention Shatta Wale and where he is coming from, which is a good omen for the country’s music industry.

The leaders of the music industry in the country could take advantage and leverage on the feat chalked to attract other deals to improve the fortunes of the industry.

Certainly, Ghana’s music industry can gain life-long friends from the global music scene and incredible memories, as well as future gigs outside the country.

This is because, an international collaboration of such magnitude could be an avenue to widen an industry’s network, by attracting other investors and record deals.

Many people in the music ecosystem will benefit from this collaboration in many ways considering the huge numbers and level of exposure Beyonce’ commands.

Though top artistes in the country have collaborated with upcoming musicians in times past and in recent days, this collaboration would rekindle that and even take it a notch higher.

For an international superstar to collaborate with artistes who have not attained her status will rekindle the level of generosity among local actors.

“Thank you My Queen for believing in my talent and giving me a platform to share my good message to the world…God will forever bless you,” Shatta Wale wrote in her appreciation message to Beyoncé.

This shows such artistic generosity can go a long way to positively impact the lives of others.

Every industry survives largely on such generosity because those at the top help those at the bottom to climb up the ladder through such collaboration in the industry at large.

Such gestures ensure there are a crop of new artistes to take the baton at any point in time.

In all, kudos to Shatta Wale and his team for making Ghana proud and lifting the bar to motivate others.