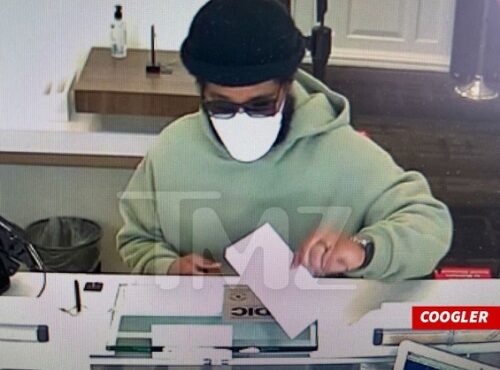 Bank staffers mistakenly thought Ryan Coogler was staging a robbery, so they called cops, and the famed director actually ended up in handcuffs, briefly.

According to an Atlanta PD report, obtained by TMZ, Coogler was detained after stopping in a Bank of America to make a transaction back in January – a completely legal transaction but that’s not how one teller took it.

Coogler walked in rocking shades and a COVID face mask – not uncommon, of course – but he handed the teller a withdrawal slip that had a note written on the back.

We’re told his message read, “I would like to withdraw $12,000 cash from my checking account. Please do the money count somewhere else. I’d like to be discreet.” Understandable, considering the amount of money he was getting but this led to the teller thinking something suspicious was going down, and cops were called for an attempted robbery.

When officers arrived, they detained 2 people waiting outside for Ryan in an SUV and then went in and brought the director himself out in handcuffs.

After an investigation, the police say this was all just a huge mistake and the fault lies with the BoA employee, who’s described in the report as a pregnant Black woman.

According to the report, when the teller went to make the transaction on her computer, it triggered some sort of an alert. So, she told her boss Coogler was attempting to rob the bank, and they called 911.

In the end, cops realized this was a screw-up, and Ryan had actually done nothing wrong. Sounds like Ryan wasn’t too pleased. The report notes he asked for badge numbers of all the responding officers once everyone was released.

He’s been in GA a lot over the past year, filming the sequel to “Black Panther,” which itself has been a drama-filled process with cast injuries and alleged COVID conspiracy talk. And now…this.