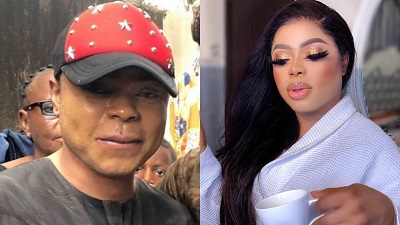 The Nigerian barbie doll, born Idris Okuneye, is known transgender who has for years been living now as a woman and prefers to be addressed as such. Bob Risky achieved a socialite status with her cross-dressing and heavy makeup as a girl. However, for the first time in a long while now, ever since switching his gender, the ever-controversial Bob Risky has ditched dressing as a woman with her usual makeup slay to show up as a man for his father’s birthday.Photos from Bob’s appearance at the birthday gathering, have been surfacing online and attract a myriad of reaction from fans who have a lot to say. See the photos and some comments below.