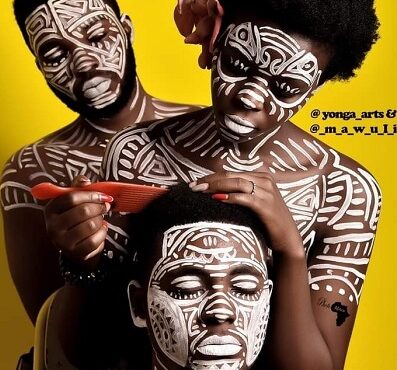 Body painting is a form of art where attractive and intriguing illustrations are displayed on the human skin. Considered one of the oldest forms of art, it can be described as a temporary tattoo which serves different purposes at different times.

It is often seen at special occasions such as festivals and may be used to either express an idea or champion a course. According to oral tradition, it had been used by warriors as ‘camouflage’ in war or to incite fear in enemies.

Although it may not be as common lately, a young Ghanaian talent, Oscar Kobla Mawuli Awuku of Yonga Arts, is taking it a notch higher with his sensual and colourful works across social media platforms.

His creativity has earned him over 100,000 followers on YouTube and many others on Facebook and Instagram. The Spectator recently interacted with this painter and he explained aspects of his craft as well as the inspiration behind his works.

Describing himself as a versatile artist, Mawuli does digital painting, sculpture, canvas painting in addition to his vibrant body paintings.

Currently a final year student of Takoradi Technical University, he studied Visual Arts at Mawuli School in the Volta Region from 2014 to 2017.

His painting started after high school when he was invited by a friend to help in the decoration of video vixens in a music video project in Accra.

“I had no idea about body painting at the time but after the project, I realised it was something I could pick up. Back in high school I used to draw patterns in my books and on tables so I followed that inspiration to start painting the human body,” he recalled.

The past five years, according to him, has been “a learning process” even as he continues to improve the craft and make it more appealing on local and international fronts.

The paintings he calls ‘Anansinism’, are used to communicate ideologies such as women empowerment and black identity, among others.

“I take inspiration from the weaving process of the proverbial spider, Kweku Ananse, and combine it with traditional Adinkra symbols to make the patterns I draw on the human body,” he said.

Mawuli said that he used to complete a full body painting in an hour or two but has now learnt to speed up and reduce the finishing time to about 20 minutes.

Although he earns some good money sometimes, he considers painting a hobby than a commercial venture, and looks forward to collaborating with bigger art galleries both home and abroad in future.

He said models which include males and females volunteered to take up his body paintings but he did reach out to some of them personally based on the concept he wanted to project.

Touching on possible side effects, he said he was not aware of any adverse effects of body painting, adding that the longevity of a body art was determined by “how soon an individual decided to wash it off the skin.”

Commenting on the somewhat controversial aspect of his paintings where models pose almost naked for their bodies to be painted, he explained that not all models preferred to strip naked and that those he painted naked did not arouse or stimulate any negative thoughts in his mind.

The eloquent artist said his family appreciated his work and encouraged him to pursue his vision to the hilt.

Mawuli, however, identifies “social acceptance” of body painting as a challenge but says he accepts criticisms as well as commendations that follow some of his works.

He noted some people doubted that his works originated from Ghana while others criticised the nude aspect of his works but he continues to do what he loves doing best.

“Every painting carries its own message and I try to improve on my work everyday. I collaborate with a lot of people on this job and I believe body painting and art in general would be a long term endeavour.

“The limitations have to do with gadgets and other equipment, if I get the needed support I believe I can take my work a step further,” he said.

The 22-year-old maintains that “the art industry is broad”, therefore, people should expand their scope about art and find things they could do to attract more people.

He again advises young people to develop themselves in any form of art they are attracted to but should not feel intimidated in doing what they love.