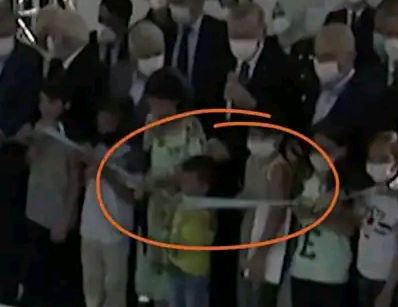 A boy at a ceremony in Turkey took a short route to fame. He was part of the opening ceremony of a highway tunnel in Turkey which was to be inaugurated by the country’s president Recep Tayyip Erdogan.

However, before Mr Erdogan initiated the ceremony, the boy got impatient and cut the ribbon with a pair of scissors in his hand. And, as expected, the video went viral on social media.

In the clip, a group of children stood before Mr Erdogan and other officials on a stage. While the announcements were being made from one side of the stage, a boy standing right in front of Mr Erdogan cuts the ribbon.

After realising his mistake, he tried to cover it up by holding the ribbon in place.

Soon Mr Erdogan tapped on the boy’s head and talks to him. After the ceremony, the president got into a talk with the children around him and exchanged pleasantries.

Most of them were happy to see the unexpected turn of events at the hands of a kid. “The highway tunnel inaugurated by the future of the country by his tiny hands… All’s well that ends well,” one person wrote.