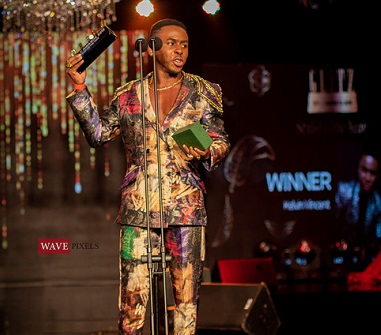 When Ghana-based stylist Kelvin Vincent discovered the #VogueChallenge, he pressed pause on posting a magazine cover.

The creative, who also runs a contemporary sustainable fashion brand called ANKV, is “not someone who likes to jump on trends,” he tells British Vogue. But, when he found out that editor-in-chief Edward Enninful was curating his favourite submissions, Vincent did a volte face. “It took me all night,” he says of placing the Vogue logo on his portrait of Grace Naa Ayorkor Quaye wearing a voluminous red dress by Yartel.

“I felt I wouldn’t stand a chance, because [at that time] there were about 50,000 #VogueChallenge posts. I did it anyway, and the rest is history.”

Vincent’s striking cover image is part of a wider fashion editorial, entitled The Fierce Muslim. Shot during Ramadan, Vincent “wanted to create fierce fashionable images that Muslim women can relate to,” he explains. “I wanted to tell them to stand firm on what they want, despite the racism, extremism, Islamophobia, and the popular stereotyping of Arab women as weak and voiceless.”

“I know women go through a lot of discrimination worldwide but I’ve actually seen it with my own eyes in Africa,” Vincent continues. “It hurts.” A staunch activist and feminist – “I always talk about unspoken cultural biases and norms every chance I get” – the creative director describes his #VogueChallenge entry as “a political move”. “I don’t know how I can change the world, but I know people enjoy creativity, so I’m going to change the mindset of people with creativity one day at a time.”

It took Vincent a week to curate the fashion for the editorial, and four days to shoot the project. Finding the right shade of red for the model’s dress was crucial because, Vincent explains, “red signifies anger and rage, courage and strength, passion and romance” – the myriad emotions he wanted to encapsulate in the pictures. The location, too, proved tricky. “We wanted to shoot at a mosque to capture the Muslim culture, but we were not allowed to for religious reasons,” shares Vincent. “I had to go back to the drawing board four times before we finally achieved what we wanted.” The energy of his collaborators – photographer Duke Tetteh-Quarshie and make-up artist Valerie Lawson – meant “magic” eventually happened on set.

Raising up fellow artists is central to Vincent’s work. “African creatives have really shown that we can own a piece of the pie, but we’re still looked at as one-dimensional,” he opines. “People are not exposed to many opportunities. I know how that feels. It feels like there’s no hope. So when I see a fellow creative doing the best they can and not being acknowledged, why would I not want to lift them up? When I rise, I don’t rise alone. It’s Africa I’m putting on the fashion map.”