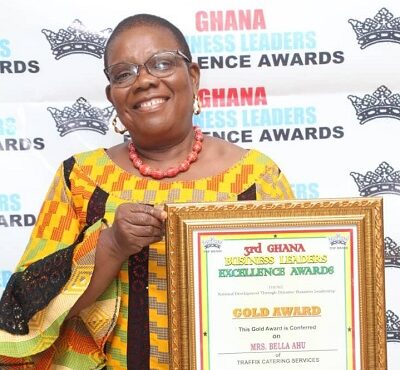 Mrs Bella Ahu is the Chief Executive Officer of Trafix Catering Services with decades of experience in the hospitality and catering industry.

Her outfit aims to promote local and continental dishes and create employment for  the youth.

She was  honoured at the 3rd Business Leaders Awards held in Accra recently for the significant impact she continued to make towards the growth of the industry while delivering excellent services to her numerous clients.

Apart from serving the public with tasty meals, she had over the years instituted cooking competition among students and practitioners to help promote consumption of local dishes.

Hundreds of traditional caterers and hospitality students have also benefited from the smart culinary training programmes she offered nationwide.

Speaking to The Spectator on her latest achievement, Mrs Ahu, dedicated the honours to her hardworking staff and loyal customers, adding that the recognition would spur her on to “do more.”

She said although the global pandemic had affected many businesses, the hospitality industry, just like other businesses, was regaining momentum, and that little did she knew that such an honour would be bestowed on her.

“I believe the Grace of God and other proactive measures have sustained us and we will continue to give off our best to the general public like we have always done,” she noted.

Mrs Ahu  did not disclose how much she had lost due to the impact of COVID-19 but said, she was compelled to realign her staff and operations so she could remain in business.

“We lost some clients and staff but as the situations are beginning to normalise, we will get back on our feet. I had 69 workers but had  to lay off 60 and work with only nine staff.”

“The disruptions caused by the disease had also caused some restaurants to rely on delivery services,” she said.

Mrs Ahu  was impressed by the steps taken by government to support small and medium scale businesses that have been worse hit by the COVID-19.

Mrs Ahu attended Takoradi and Ho Polytechnics from 1976 to 1980 where she trained to become a caterer.

She subsequently embarked on other entrepreneurial training programmes before she obtained post graduate Diploma in Business Management from the Oxford University in the  United Kingdom (UK).

She established Trafix Catering Limited at the National Theatre, Accra in 1983 having served in other capacities as the Assistant Matron.

In 2001, she set up Cook Ghana, a non-governmental organisation to champion the course of traditional caterers and to create awareness on standard hygienic food preparation and the national value of Ghanaian dishes.

Mrs Ahu holds executive advisory positions in some institutions including the Ghana Toursim Federation (GHATOT). She was the past President of the Institute of Hospitality, Ghana, and also been executive member of Ghana Association of Women Entrepreneurs (GAWE).

She continues to be an inspiration and a role model to the young girl children and encourages them to live decent lives and pursue their dreams.

She had been adjudged the Ghana Business Chamber ‘Woman of the Year’ in 2017  and regularly publishes articles on indigenous food in Ghana. One of her prominent recent articles is titled “Is Ghana losing Her food culture?

She served on various tourism related committees such as world Tourism Day Planning Committee (2009) and had been a member of the National Tourism Policy Committee in 2006.

Mrs Ahu said she was open for partnerships at her Hospitality Centre of Excellence at Prampram where she trains  individuals and corporate bodies in cake decoration, pastry and cuisine making.

Trafix Catering Services which began 35 years ago with the aim of producing quality meal has trained a lot of people in the hospitality sector.