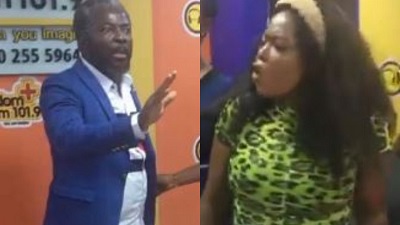 What started as a peaceful dialogue turned into a disaster when Papa Shee decided to make some wild allegations against the founder and head pastor of Annoited Palace Chapel (APC) on Accra FM yesterday.

In Papa Shee’s submission, he alleged that Rev Obofour isn’t from God and that his miracles are not genuine.

But Perpetual didn’t allow him to end his submission, accusing Papa Shee of character assassination.

“Why would you destroy someone’s image on radio?” Perpetual quizzed, adding “You can confront Rev Obofour and tell it to his face that he is not from God but don’t sit on radio to destroy his reputation.”

Papa Shee interjected her, claiming she has allowed herself to be used by the devil.

“You are allowing the devil to use you. I will deliver you and Obofuor,” he claimed.

It didn’t end there. The heated argument escalated, with Perpetual involving curses.

“Stop spreading false rumours about him or calamity will befall you. You shall reap what you sow,” she said.

Papa Shee ended the argument by saying Perpetual is a ‘liar and possessed’ before storming out of the studio.