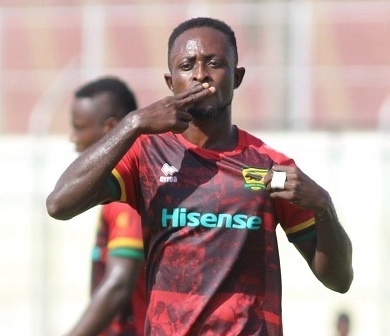 PORCUPINE Warriors Asante Kotoko must break the WAFA jinx in a bid to maintain their top spot when the two teams clash today in their Match Day 26 fixture of the Ghana Premier League (GPL) at the Obuasi Len Clay Stadium.

The Asanteman representation have failed to find wins in their last four meeting with WAFA who won one with the last three ending in draws.

With pressure from the chasing pack including Hearts of Oak, Karela United and Medeama SC, Coach Mariano Barreto and his charges must unlock the unyielding defence of WAFA to secure the vital three points.

Luckily, the likes of Fabio Gama, Abdul Ganiyu, Michael Vinicius and skipper Emmanuel Gyamfi are in the form of their lives and would be in the thick of affairs for Kotoko.

Both teams have also won their last games and would go into the clash with hopes of maintaining their winning streak to consolidate their positions on the league table.

However, WAFA will be keen on preserving their recent dominance against Kotoko and a win would be immensely fancied.

Currently occupying the eighth position on the league log with 38 points, a win would push them close to the top spot and would go all out for a kill against the side they have been very comfortable against.

Elsewhere, Accra Great Olympics will slot it out with bottom-placed Inter Allies in another cracker at the Accra Sports Stadium this afternoon to usher in the weekend round of matches with the mass of the games scheduled for tomorrow.

With Olympics poised to securing top-four place and bounce back to winning ways after their 1-0 defeat in their last game – and Inter Allies beaming with confidence after thrashing Berekum Chelsea 5-0 in their last game, the stage is really set for a cracker.

It is going to be a difficult afternoon for Oly as the Allies are determined to throw everything into the game to give their relegation fight a big boost.

Struggling Legon Cities would host Aduana Stars tomorrow at the Accra Sports Stadium with the home side in search for a win to stay in the league.

Third-placed Karela United will travel to face Berekum Chelsea at the Golden City Park as they search for the maximum points against a side that seemed to have given up on their fight for the league title.

The Dawu Park will host Dreams FC and Bechem United in another mouthwatering encounter while Medeama and Ashantigold face off in a very dicey fixture expected to be keenly contested.

Ebusua Dwarfs and Liberty Professionals clash at the Cape Coast Stadium with Elmina Sharks and King Faisal battling it out at Nduom Sports Stadium.