Can Kotoko crack the Aduana nut at Dormaa? 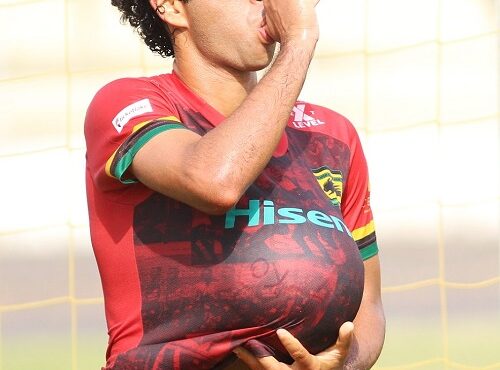 The heated title hunt between the two decorated clubs which used to be a regular feature of the league season lost its place as the two sides giants struggled to find their feet in the early race as they chased the tail of Medeama, Karela United, Aduana SC  and Great Olympics.

But as the competition heads into its 27th week, the two sides have rediscovered their form and historic urge to lead the chase for the title with Hearts on top on goal difference.

But Kotoko can resume temporary charge of the summit after they relinquished topspot to their arch-rivals, drawing their last two games. Heading to Dormaa to face Aduana Stars today, that task would be a difficult one as the ‘Ogya boys’ have carved a reputation as a bogey side for the visitors – winning their last two encounters.

Compounding the revenge mission for the ‘Porcupine Warriors’ would be the absence of head coach  Mariano Barreto who is away in Portugal to ostensibly renew his UEFA coaching licence and the dreaded mission of playing at the Nana Agyemang Badu Park where the homeside are yet to be defeated in 12 outings.

The trump card for the Porcupines would be the ability of their strike force comprising Fabio Gama, Andy Kumi, and Emmanuel Gyamfi to convert their scoring opportunities, a phenomenon that was missing in their last game against WAFA.

The situation is a sharp contrast in the camp of Hearts of Oak who are flying high under Samuel Boadu. The ‘Phobians’ are on a four-game winning streak and would be hoping to extend that run against an ailing Berekum Chelsea team whose last game against an Accra-based team was a 5-1 drubbing by Inter Allies. More remarkably, the rippling success would be that the Phobians extend their stay at the summit.

In other games, fourth–placed Medeama who lost some fire in their title bid will confront bottom side Inter Allies at the Theatre of Dreamsat Dawu. They must, however, be mindful against the homeside who by recent results have proved their readiness to fight against the relegation drop to the death.

High-flying Dreams’form would be tested by relegation-threatened Liberty Professionals today at Sogakope.

A local derby set to thrill locals at Techiman would be contended between a revived King Faisal and distraught Eleven Wonders. With both sides facing the threat of relegation, the game is primed to be a heated affair that will serve the appetite of the 25 per cent football fans permitted to the venue on Sunday.

Resurgent WAFA, unbeaten in three games, will hope to carry on with their new venture against Ebusua Dwarfs who have a knack for tilting the scales, setting the game up as a blockbuster at the Sogakope Park on Sunday.

Legon Cities headcoach, Bashiru Hayford who has made significant strides in steering his team away from the relegation pit will guide his charges against his former side Ashantigold who fell off a cliff after a good start, while Bechem United would be eager to get back on track against struggling Elmina Sharks.

As of press time yesterday, visiting Olympics were slotting it out with Karela at the dreaded Crosby Awuah Memorial (CAM) Park in Aiyinase.