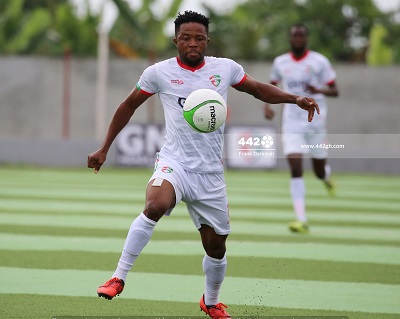 League leaders Karela United’s attempt to extend their lead at the top of the league will face fierce opposition today when they contend with Asante Kotoko in a match-day 13 Ghana Premier league clash.

Karela have taken the league by storm shocking many pundits with their early climb to the summit and their sterling performance that has seen them lose just two out of 12 games.

Impressively, the ‘Passion and Pride’ boys have won all six games at their dreaded CAM Park at Anyinase, dispatching off opponents with ease.

Despite this impressive run, Coach Evans Adotey’s boys may face the biggest threat to entrench their home invincibility against a Kotoko side who are yet to lose on the road in six outings and inflicted a 1-0 defeat on the homeside in a similar fixture at the CAM Park last year in the truncated league.

Both sides boast clinical arrowheads as Karela have in their fold the league’s top-scorer Diawiase Taylor whilst Kotoko striker Kwame Opoku would be eager to score after failing to hit the back of the net in three games.

At the Accra Sports Stadium, Hearts of Oak would pitch their strength against a resurgent Legon Cities in a local derby. Cities would be eager to continue their fine form that has seen them climb drastically out of the claws of relegation into 11th on the league log. This aim would be a long-shot with the ‘Phobians’ losing two Accra derbies against Allies and Olympics, they would be eager to reclaim some pride in the capital against Cities.

In other games, high-flying Olympics will be eager to maintain their momentum against Bechem United but would be required to produce double of their scintillating displays as Bechem United are undefeated at the Nana Gyeambour Park whilst WAFA’s quest to overcome their 3-0 loss in Dawu against Dreams would be a herculean ordeal against Aduana at Dormaa.

At the Len Clay Stadium at Obuasi, Ashantigold who are suffering a loss of form after going winless in three games face Liberty Professionals who like the ‘Miners’ have lost their way and must carve a winning plan as they battle with the threat of relegation.

Dreams FC, who are on the ascendancy, will face a difficult task trekking to Bechem to face XI Wonders, who despite a promising start have stuttered with a run of bad results with Elmina Sharks confronting Berekum Chelsea at the Nduom Park.

King Faisal would be hoping to repeat their splendid displays that saw them bounce back from 3-0 down to win 4-3 against Berekum Chelsea on Matchweek 11 against Medeama, despite losing to Olympics 3-1 in Accra on Wednesday, ‘Alhaji Gruzah’ boys have shown a determination to avoid the relegation drop with top marksman Kwame Peprah leading the charge.

Bottom-placed Inter Allies’ hopes to revive their season would have to pass the litmus test against stubborn Ebusua Dwarfs who have proven to be good travelers this season when the two sides clash in Accra.