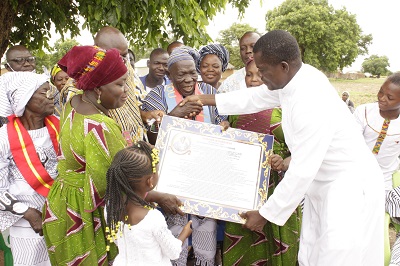 There is a popular saying that “a country that does not honour its heroes is not worth dying for”.

For this reason, the Catholic Communities of Datuku and Kulpeliga in the St Theresa of the Child Jesus in Tongo Parish of the Navrongo-Bolga Diocese honoured a retired catechist, Mr Gabriel Tibil, popularly known as Fada Tibil, a traditional ruler with the skin name Dasang Naab Kokorum Malimyalig (the expansion of an existing water source).

Fada Tibil, born about 105 years ago, had no formal education but was naturally brilliant and picked up teachings very fast from the White Fathers who started the Catholic Church in the then Upper Region.

The White Missionaries came to Sekoti in the Northern Region in 1927 and Fada Tibil started catechism at the age of 12, and because of his brilliance, he was picked by late Fr Lapointe to attend the Catechists’ School at Binduri near Bawku in 1954 and was baptised the same year.

Fada Tibil was the first catechist to start the St John the Apostle Catholic Church at Sekoti in 1957 and was transferred to start another church at Datuku in 1961.

He retired as a catechist in 1986 after returning to Sekoti and was later enskinned as the chief of Dasang, a Divisional Chief under the Sekoti Paramountcy.

On the occasion of the 2020 Fathers’ Day celebration, the Catholic Communities of Datuku and Kulpeliga honoured Fada Tibil with a citation, a smock and a hat, a walking stick, a local cloth for the wife, Mrs Catherine Tibil, and an undisclosed amount of money.

In appreciation of the surprise presentation, Mr Tibil said he was so happy and at a loss for words to describe the gesture, but prayed for the youth to be law abiding and emulate the good works of the nice people around them, especially the aged.

The power and means to change: The Word of God