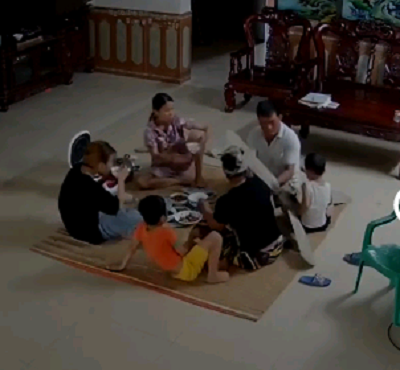 A video uploaded on YouTube by ViralHog showed a scenario that can make you jump off your seat at once.

A family of six were seen squatting on the floor on a mat and relishing their dinner while talking to one another.

Suddenly, the little child in their midst heard a noise and looked around. Seconds later, a ceiling fan dropped right on the lap of the child and the two men seated beside him.

The mother jumped from her seat and hugged the little child while the others remained frozen for quite a few seconds.

The caption of the video read: “The whole family was eating when the ceiling fan fell right between us. Luckily no one was hurt.”

Viewers were shocked at the fact that the family escaped such danger without any injuries. A user commented: “Now that’s a miracle! Another user, wrote: “That’s why I abhor ceiling fans. They don’t look good with the room, and they break apart with age.” – ndtv.com